Top rated talk show host Michael Savage says the Bible predicts coming war and invasion against Israel and that Obama and nations resisting “God’s chosen people” are fomenting it. He says those who come against Israel will ultimately face ghastly annihilation by the Almighty.

Savage (Jewish) says that, by calling for pre-1967 borders of a new Palestinian state, President Obama is “laying the groundwork for a massive war against the Jewish people in the Middle East.” He implies it is morally dangerous and reprehensible to criticize Israel, giving aid and comfort to its enemies and God’s. He says God, in turn, will wage war against all “these despicable nations that Obama is in love with [who] rise up against the Jewish people… there will be so many corpses coming at Israel, it will take years to bury all the corpses of those that rise up against Israel.” (See WND's article Americans to Israel: Don't listen to Obama)

Savage read extensively on the air from Ezekiel 38 and 39, ominous Old Testament Scriptures which are taken very seriously by evangelicals yet are completely misunderstood by them.

Here is what these chapters really say:

Beginning with chapter 38, God is telling the prophet that in the last days “the chief prince of Meshech and Tubal,” clearly the Antichrist, will look covetously at the riches of Israel. The people of Israel are living in what seems to be a state of millennial security and bliss. They have been “gathered out of many people” and are “brought forth out of the nations, and they shall dwell safely all of them.” (Ezekiel 38:8) “They are at rest, that dwell safely, all of them dwelling without walls, and having neither bars nor gates.” (Ezekiel 38:11) A cursory reading of these passages might indicate that what the prophet is seeing is the Jews in the millennium. Such far-seeing prophecies almost have us believe that the lion has at last lain down with the lamb, with contentious Israel now dwelling at peace with the nations.


Israel at Peace, Yet Wicked

We are jerked back to reality, however, in Chapter 39 where it says that during this period of sweetness and light Israel is actually "polluting God’s holy name," (Ezekiel 39:7) trespassing His commandments (Ezekiel 39:26) and because of their iniquities He is hiding His face from them! (Ezekiel 39:29) All this is done, as verse 26 says, "when they dwelt safely in their land, and none made them afraid."

It is because the iniquity of Israel will have reached an unendurable magnitude at this time that God will call the “prince of Gog” (Russia) to invade Israel, conquer it, and disperse them into captivity for their sins (Ezekiel 39:23-28). Until then, it is implied that Israel does not know God; yet after this great punishment to come, the prophet says… “the house of Israel shall know that I am the Lord their God from that and forward.” (Ezekiel 39:22)

The prevalent evangelical viewpoint denies that Gog will successfully invade Palestine or enslave the Jews. Ezekiel 38:18 is cited as upholding this claim. “And it shall come to pass at the same time when Gog shall come against the land of Israel, saith the Lord God, that my fury shall come up in my face.” This and subsequent Scripture which describes the armies of Gog being destroyed on the mountains of Israel are taken as proof that Jerusalem in the last days is invulnerable to attack by Antichrist or by Russia. These Scriptures are widely quoted by fundamentalists as giving assurance to America that a war fought in defense of Israel can never be lost.

However, Scripture says nothing of the kind. Ezekiel 38:18 merely points out the fact that God is seized with anger at Gog’s presumption. But in no way does it infer that He immediately destroys him, something which would frustrate the whole structure of prophetic judgment on apostate Jewry. Such necessitates chastisement of the Jews at the hand of the Antichrist ("wrath on this people," as Jesus predicted in Luke 21:23), and the Antichrist in turn is chastised by God.

In fact, Ezekiel 39:23 proves that, although Gog is finally destroyed by God in Palestine and on the mountains of Israel (battle of Armageddon), yet it is only after he conquers and enslaves the Jews: “Israel went into captivity for their iniquity: because they trespassed against me, therefore I hid my face from them, and gave them into the hand of their enemies; so fell they all by the sword.”


What Does It Mean?

What are the implications of these incredible Scriptures? What do they tell us concerning the future of Israel?

First, they assert that just before the millennium there is coming a period of great “peace and safety” for Israel, so much so that she will be able to “dwell without bars or gates.” She will have no need of the conventional defenses that have been vital to every other period of her history. This is especially unprecedented for a nation which, because of her size and geographical location, has always had to be militaristic.

And this period is not, as idealists might suggest, a coming era of world utopia, when not only Israel but all nations will be living “without bars or gates,” with aggression having lost its appeal to the nations as a way of settling issues.

It surely has not lost its appeal to the Antichrist, as Chapter 38 indicates, who is about to swoop down upon the rich yet undefended land of Israel!

No, there must be another reason why a city and people possessing such wealth are totally undefended; a reason that is much more in keeping with human nature and the dynamics of world politics. It is because Jerusalem, or Babylon the Great, is in such military and economic control of the nations that the threat of anyone coming against her has become obsolete. We are told that the Great Harlot and the beast she rides upon do not simply share power with the world, but rule it, exercising lordship and dominion over “all nations, kindreds and tongues.” (See, 'Babylon the Great' is Israel)

Does Ezekiel describe that state of Israel’s impregnability which the nations admire and lament, when they say of her new husband, Antichrist, “Who is like unto the beast? Who is able to make war with him?” (Revelation 13:4)

Yes, he does. These amazing passages clearly describe Israel in dominion of the world, a dominion which has brought her the impregnability and “peace and safety” she has coveted so long, yet without the clean heart God says she must have if she is to inherit the land. These passages ominously remind us that the Jewish return to Palestine today is indeed prophesied in Scripture, yet not in the joyous way we would like to believe. The present experiment in Palestine is headed directly for the kind of world control which necessitates that every other rival become impotent. For if the Jews will someday live in such a utopia that “none made them afraid” and yet are wicked, it can only be because those who might make them afraid are powerless to do so. There is no other way to make sense of these Scriptures.

With such a pattern established in the Old Testament, it is not surprising that a very similar situation appears in the last book of the New Testament. In Revelation 17 a great harlot is described as fornicating with the kings of the earth and making the earth drunk with the wine of her spiritual lewdness. Such a description of Israel could have been lifted out of Hosea, Joel, Jeremiah, or Ezekiel. In more than 80 of the clearest statements, Israel is described as being the archetypal harlot, the first to have had spiritual relationship with God and the first to violate it.

Yet, just as Israel of old was turned upon by her lovers, Assyria and Babylon, ravished, desolated and burned with fire, so we see the "Great Harlot" in the last days undergoing the same fate. Ten world rulers, in confederation with Antichrist, the beast upon whom the woman sits, shall do exactly what the confederate armies under Sargon II did to Israel, what Nebuchadnezzar did to Judah, what the forces of Antiochus Epiphanes did to Palestine, and what Titus did to Jerusalem. Only they bring against Zionist world control an international army so numerous it takes seven years to bury their corpses. This powerfully indicates that "tiny" Israel has mushroomed into a world-dominating government of such impregnability that Antichrist believes he needs the largest army in history to overthrow it.

The destruction of the Mother of Harlots, Israel, in the last days thus completes a pattern of apostasy and inevitable judgment established and repeated millenniums ago. The Jews have forgotten or ignored those slumbering curses pronounced by every major prophet from Moses to Malachi against Israel if she continued in rebellion. And the Church today has assisted Israel in that amnesia, cooing, like the false prophets of old, that Jerusalem need not fear destruction.


(This article and images below were adapted from Israel: Our Duty, Our Dilemma by Rev. Ted Pike, 345 pages, available for $24.90 at www.truthtellers.org.) 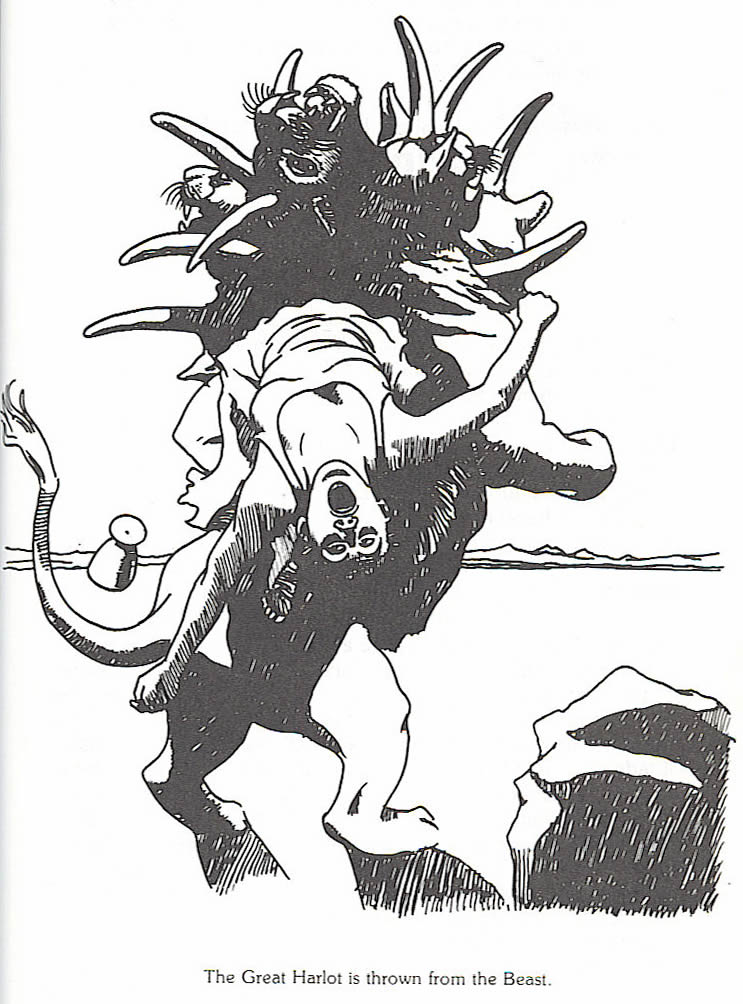 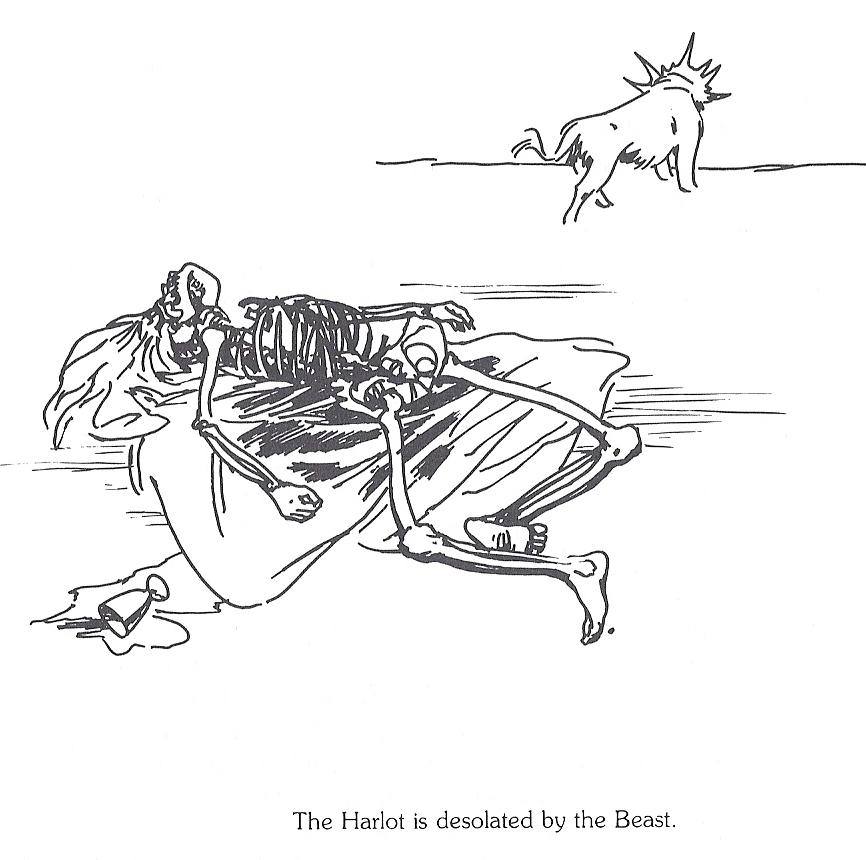