After polling 2,000 Americans, the Anti-Defamation League of B'nai B'rith claims 27 percent of Americans hold the "anti-Semitic” belief that Jews were responsible for Christ's death. 1 This implies the New Testament, which repeatedly makes this charge, is also anti-Semitic, i.e., "hate literature." 2

For ADL's Abe Foxman, even Ann Coulter's innocent statement that Jews are incomplete without Christ is shockingly “insensitive." ADL says Coulter has proven her "anti-Semitic" "bigoted and hateful views." 3 Actually, by charging Coulter with hate for simply stating the Gospel, ADL is reviling the One who authorized Coulter to make that claim: Jesus Christ.

But while Christianity is called anti-Semitic, it's no problem when Jews believe their leaders had Christ executed! The Talmud -- highest ethical and religious guide for observant Jews like Foxman — doesn’t mince words. (See, ADL's Foxman: Man of Faith?) It says Jesus was a sorcerer and apostate and the Pharisees legitimately had Him killed on the eve of Passover (not by crucifixion but by stoning, burning, decapitation, and strangling). 4 The Talmud adds that Christ is now in hell, writhing in boiling hot semen. 5

Our humanity recoils before such satanic hatred and blasphemy against the Creator of all things.


ADL on the Attack

Like the Talmud, ADL is on the attack – against not only Coulter but any Christian leader who publicly asserts a Biblical perspective toward Jews. ADL and Jewish-dominated media (not Christian leaders) set the moral trends of our largely secular society. ADL teaches that evangelical Christianity is a hateful, hurtful belief system that created anti-Semitism and is ultimately responsible for the Holocaust. It should be restricted and despised, in other words, persecuted. (See, ADL's Foxman: New Testament is Anti-Semitic)

When ADL bites down, it doesn't let go; like a pit bull, it keeps grinding. I saw this in the late 1970s when ADL and Jewish media decided to relentlessly push homosexuality and gay rights down the throat of Christian America. I thought ADL's new policy was the biggest mistake it could make -- that it would incite Christian conservatives and blue collar Americans to overthrow the liberal power structure in America. How wrong I was! America at first abhorred, then endured, and now very largely embraces ADL's "tolerant" pro-homosexual policy.

ADL knows that if it says Christianity is anti-Semitic and repeats it long enough, people will get used to it. Eventually, it will be accepted as reality.

Make no mistake. ADL now aggressively penetrates the spiritual airspace of Christianity, testing what resistance arises. Incredibly there has been virtually no evangelical opposition to its strafing of Coulter, just as Hitler encountered little world protest after his aerial bombing of the Spanish village of Guernica in 1939. ADL must be delighted with the virtual absence of evangelical outcry. Few missiles of truth have been fired against ADL from Christian/conservative print media. Few Christian fighters have launched into the airwaves or cyberspace to defend Coulter. Why? Christian leaders fear they will also be attacked as anti-Semitic.

Their cowardice encourages ADL to proceed into outright persecution of Christians -- primarily through their hate and bias crimes laws. (Watch Hate Laws: Making Criminals of Christians) Because Christian leaders can’t bring themselves to even name ADL as the arch opponent of Christian civilization, they can't save America or Christianity. (Watch Ted Pike's Report "BETRAYED! New Right Leaders Help Pass Hate Bill") Like Chamberlain and Asquith of pre-WWII Europe who appeased Hitler, they are the timorous caretakers of our declining republic — not its deliverers.


Overcoming “Fear of the Jews”

Such indecision before evil results from fearing man more than we trust God. To overcome that fear, all Christians must die to their self-will and to reason and sight as their ultimate guidance system. They must trust God alone. Christ described this as His barest requirement to even be a Christian: "No one of you can be my disciple who does not give up all his own possessions."(Lk.14:33) When we are willing to hate even our own lives for the sake of Christ's kingdom truth, His Holy Spirit enters our lives with power. He gives us confidence in His ability to save and preserve. We receive courage which is not of this world.

Much of the American church, however, lacks this faith. It values safety more than truth. That's why so many Christian leaders cower before ADL and its threat of being tarred anti-Semitic. They fear losing financial support, material possessions, and prestige; they fear controversy. Thus they do nothing to expose what is emerging as the greatest threat to Christianity in history: militant Jewish anti-Christianity radiating from ADL and its parent organization, B'nai B'rith International.

There is no security outside of God. Ironically, Christian civilization, far from finding safety through appeasement, predictably finds itself increasingly endangered within a hostile world.

At the beginning of the 19th century, another international bully, Napoleon, seemed invincible. He threatened to conquer not just Europe but England. In response, Admiral Nelson installed a plaque in every British warship saying, "Fear God, fear the king, and fear no man!" The British navy gained a reputation for courage not only against Napoleon but in pursuing pirates, the high seas' bullies, to the remotest parts of the world. When a pirate was finally caught, his corpse was imprisoned in an iron cage and hung at the mouth of the harbor to remind every mariner what the British navy had in store for anarchists.

The British navy's esprit de corps also made it unthinkable to abandon a British ship under attack. Evangelicals' shameful lack of support for Coulter reveals that the American church will abandon its wounded. It will leave them to die.

What if Christians today had the spiritual power of our beginnings? Ideological pirates like Foxman would be intellectually hunted by a host of Christian defenders and exposed to public shame. Never again would Christians like Ann Coulter, innocently sharing the Gospel, be hung out to dry. Instead, ADL would be twisting in the wind.

5. Gittin, 56b – 57a. Because Balaam was a type of false prophet seducing men to idolatrous practices, the Jewish Encyclopedia in the above article tells us, “… hence also the pseudonym ‘Balaam,’ given to Jesus in … Git. 57a.” Here is Gittin 57a, as the Talmud visits Jesus in Hell. 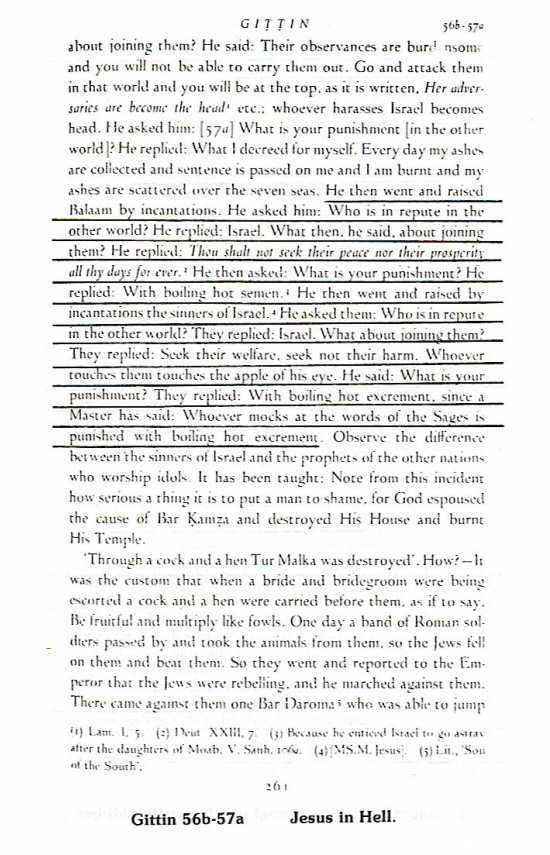