DON'T JUST PROTEST, PROTEST SMART! Click here for Ted's latest alert during the Presidential transition.
|   JOIN FREE FOR E-ALERTS! Click to sign up with your email.   |
|   DONATE TO TRUTHELLERS: Click here for the NPN Store page with books, videos, and donation options.

Rev. Ted Pike is director of the National Prayer Network, a Christian/conservative watchdog organization. He is a 1971 graduate of Portland State University, with emphasis in art and philosophy. He is also an accomplished filmmaker, poet, sculptor, and painter. Some of his paintings are presently featured in the ninth annual edition of New Art International by Bookart Press. 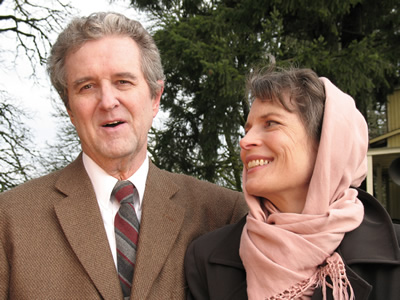 Rev. Ted Pike's outreach is largely responsible for international publicity concerning the arrest and imprisonment of 11 Christians in Philadelphia on October 10, 2004. They were threatened with 47 years in prison for the "hate crime" of publicly witnessing to homosexuals.

Rev. Pike is also the primary national opponent to federal hate crimes legislation, proposed by the Anti-Defamation League of B'nai B'rith. He and his National Prayer Network have played a pivotal role in defeating such legislation the last four times it has been introduced in Congress.

Click here to learn about
the National Day of Prayer.

In the tradition of Christ and the Hebrew prophets, Rev. Pike is an outspoken critic of ADL's evil Jewish leadership. Countless listeners are deeply appreciative of his timely warnings against hate laws and his exposure of those who have created them.

Today, ADL/B'nai B'rith hate law bureaucracies are proliferating throughout the world, ending free speech and free talk radio. This has happened in Canada, England, France, Germany, Australia, etc. With establishment of B'nai B'rith's "Department of Global Anti-Semitism" in the U.S. State Department and a 55-nation hate crimes bureaucracy centered in Europe, the "Organization for Security and Cooperation in Europe," the threat to free speech posed by hate laws is an increasingly urgent subject for discussion for talk radio, especially for shows with Internet access.

Decades of research and activism have resulted in the production of a book and multiple video documentaries. Rev. Ted Pike, as no other, has the expertise and experience to explain the very complicated subject of hate laws in a manner that is lively, and easy to understand.


In 1776, President George Washington, in gratitude for divine assistance in defeating the British, proclaimed that a National Day of Fasting and Prayer be observed on the first Thursday, every May. This was to be an occasion in which all Americans were encouraged to do nothing but intercede for God’s continued guidance and protection.

Yet, especially during the 20th century, the national day of prayer was virtually forgotten.

In 1980, my father, Rev. Claude Pike, a Christian conservative radio commentator in the Pacific Northwest, was deeply concerned that, with the election of President Reagan, spiritual as well as political renewal be encouraged for America.

Revival of the national day of prayer seemed a perfect means to help return America to faith. But what could he, just one man, do?

Twelve years earlier, our aviation family, my commercial pilot brother John, my father and I, had restored, as part of our youth ranch ministry to inner-city youth in Portland, Oregon, a 1929 Bellanca Pacemaker, a very rare, long-distance record-setting monoplane. We bought the wreckage, its fuselage broken in half, for $150.00. It had crashed in a lake in Canada.

“Why not take our Bellanca, christened as “Old Glory,” my father suggested, “and fly around America calling for re-establishment of the national day of prayer?”

So, in August, 1980, powered by a droning 450 horse power radial engine and $3,500 from a loan shark, the three of us took to the air. We had a super-loud speaker attached to the belly of the Bellanca as we circled around the major cities of America. Millions heard our loud speaker blare, “Pray for America.”

A huge aerial banner trailed behind us with the same slogan easily visible to multitudes. From Boise, Idaho, to Watervliet, Michigan; to Tupelo, Mississippi, to Dallas, and Los Angeles, we circled above patriotic rallies and gave interviews to the press. We gathered many thousands of signatures petitioning the President to revive the National Day of Prayer.

Finally, while in Washington, D.C., promoting our cause to religious and conservative leaders, my father was able to take his request directly to Morton Blackwell, President Reagan’s liaison to the religious community. Several weeks later, on Feb. 6, 1982, my father was in the Oval Office of the White House, witnessing along with other “new right” religious leaders, President Reagan’s re-instatement of this long-forgotten day of prayer and gratitude to God.

Soon Congress passed its own resolution and large Christian-conservative organizations, such as Campus Crusade for Christ and Focus on the Family, made observance of the National Day of Prayer a national institution. Predictably, the ACLU tried vehemently to nullify both the President’s proclamation and the Congressional resolution, claiming that they violated separation of church and state. Yet the National Day of Prayer survived all legal challenges.

Today, just as President George Washington intended, church bells all over America ring out on the first Thursday in May. They remind us that we as Americans are free only as long as we continue to remember God as the author of our freedom, and are ever vigilant to preserve His priceless gift.

Decades earlier, the twisted hulk of “Old Glory” lay on the bottom of a Canadian lake, its fuselage broken in half, its wings collapsed. Yet, a visionary radio preacher, by faith, resurrected it to soar again, fulfilling its greatest mission.

Today, America, with over half of her marriages failing, and drugs, pornography, sexual perversion and abortion rampant, is in a predicament similar to that broken airplane. Can God resurrect America to soar again to the potential that our Founding Fathers envisioned?

God’s promise remains: “If my people, who are called by my name, will humble themselves and pray, and seek my face and turn from their wicked ways, then I will hear from heaven, and forgive their sin, and will heal their land.” (II Chron. 7:14)

The National Day of Prayer is a potent tool toward national revival.

Religious leaders and broadcasters, as well as all fellow Americans, let’s make the most of it on the first Thursday in May each year!

In almost every age, both scripture and history reveal that false Jewish leadership has led the average Jew into bondage, persecution and exile. The ancient Pharisees epitomized such "blind guides," provoking the Romans to destroy Jerusalem in 70 A.D.

So it is today. Evil Jewish political, religious and cultural leadership continues to stimulate a backlash of anti-Jewish feeling. Many resent creation of "anti-hate" laws world-wide by the Jewish Anti-Defamation League of B'Nai B'Rith. Many also resent production of such blasphemous and immoral films as "The Last Temptation of Christ" by Jewish controlled MCA.

Most powerfully, anti-Jewish feeling has been stimulated by false Zionist leadership in the Middle East. Such leadership disobeyed God's instruction to His people that they live in contentment among the nations (Jer. 29:4-7) until the Second Coming of Christ. Only then, when a remnant of Jews will believe on their rejected Messiah, Jesus, will Israel at last enjoy divine endorsement to re-occupy God's holy land, a land strictly reserved for Jews who are obedient. Only then will a wealth of Old Testament scriptures prophesying national restoration to Palestine be fulfilled.

Instead, a century ago, false Zionist leadership convinced the Jewish people that they could escape persecution, re-occupy the promised land, and fulfill scripture without obedience to their true Messiah. Most evangelical Christians agreed with their unbiblical claims. The result has not been an end of persecution for Jews. Instead, the world has endured a century of strife and hatred against Jews by the Arab world – a strife exploding into international Arab terrorism. Far from becoming a land of refuge, Israel is the most dangerous place a Jew can live. "There is no peace to the wicked." (Isa. 48:22)

A primary purpose of this website is to protect and deliver Jews from the yoke of bondage to apostate Jewish leadership so that God's destiny for a remnant of Jews might be fulfilled. If such false leadership is not restrained (as Christ did to the Pharisees), even more waves of anti-semitism will sweep the world.

Yet, if such a backlash emerges, it will not be the Jewish rabbis, financiers, and media moguls in high places who will suffer most. It will be the Jewish people. This is what happened in Weimar Germany in 1939 when Jewish shopkeepers had their windows smashed to atone for the sins of Jewish financiers in high places.

St. Paul expressed the purpose of the National Prayer Network perfectly. He said: "Brethren, my heart's desire is…for their salvation." (Rom.10:1) In order to protect God's chosen people, a remnant of Jews, it is necessary to educate both Christians and Jews concerning the magnitude of the threat that evil Jewish leadership poses to both.

Ultimately, we believe, such biblically oriented, fearless truth telling will prove more of a "blessing" to Jews than the traditional military and moral approval of Israel by evangelicals. Such has only encouraged Zionist warlords, such as Begin, Shamir, and Sharon, to further antagonize the Arab community. As a consequence, America has now been drawn into the Middle East for one colossal, unnecessary purpose: to make the Middle East safe for Israel.