Ever since I began my career as a Christian/Conservative activist at age fourteen I have repeatedly heard the following: "What this country needs is an uprising of patriots to descend on Congress and throw the bums out!"
At long last that uprising took place on January 6, 2021. A virtual army of perhaps tens of thousands of Trump supporters descended on Washington D.C. and, breaking down fences, even entering federal offices, attempted physically “throw the bums out!“
But instead of political bums being shamed and expelled, it was a radicalized throng of patriots who, by disobeying the rules of God and civilized society, became the shamed. Of course, the media seized this Hell-sent opportunity to portray Trump and his ostensibly red/necked, ignorant, and delusional Christian/Conservative followers as fanatical insurrectionists.


Where Did They Go Wrong?

They ignored the Bible. The apostle Paul warned the New Testament Church that since Christians were prime targets for suspicion and persecution by the Roman government, (as well as by the Jews), they must be very careful not to provide the slightest pretext for accusation that they were attempting to foment rebellion. Thus, Paul instructs Christians to “Submit yourselves to every ordinance of man for the Lord’s sake … “, I Peter 2:13. “Giving no offense in anything, that the ministry be not blamed… “, II Corinthians 6:3.
Obedience to one simple, doable Biblical command could have prevented disgrace to Trump’s supporters. It also would have allowed crucial testimony by Republican Senators to go forward in the Senate, possibly resulting in a ten-day delay in certification of the election. This might have empowered vastly greater documentation of voter fraud. Yes, there is a distinct possibility that Antifa ‘agents-provocateur’, disguised as sign-toting Trump supporters, may have been among those breaking down the fences and entering. But even if this is true, a horde of ‘Trumpists’ rushed into the vacuum which had been created. If these largely Evangelical protesters had really been Biblically convinced, they would never have pushed aside police and reasonable laws meant to further the public good.

Here are three guidelines that have unfailingly protected me over my lifetime of moral and political activism.

1. Give yourself entirely to Christ- soul, mind, body, resources. Obey the Bible scrupulously. Be at all times ready to witness for Christ, but also prepared for opposition to evil. Listen to what the Holy Spirit might have you do or say.

2. Be aware that the strategy of Satanic people and media is to provoke the righteous by blatant insults and falsehoods to such a degree that we will erupt in reckless rage and multiplicity of words. The forces of Satan are then able to make a case that we are emotionally unhinged, out of control, even insane.
Yet as long as we remain silent, (as Jesus was before Pilate) such defamation is denied to evil. Yes, reply can and perhaps must come, but preferably only after much thought and prayer and at God’s leading. It must be made with even greater calculation than evil possesses. 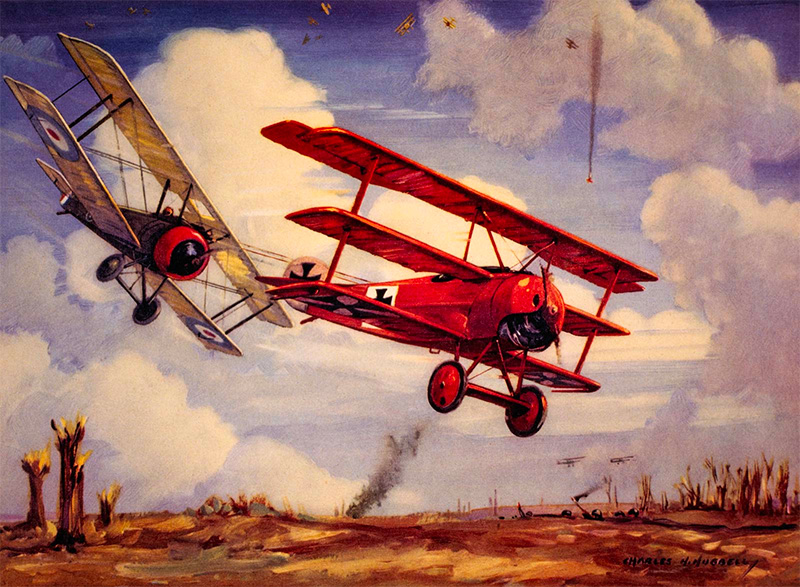 Charles H. Hubbell painting of The Red Baron in action
3. Wait for a position of advantage. In WWI, the ‘Red Baron’, Manfred Von Richthofen was very aggressive in combat when he had to be. But unlike many of his fellow fighter pilots who were itching to throw themselves into engagement (and often went down in flames), Richthofen had a different way to “protest“ incursion of allied planes over Germany. He said, “I always wait to attack until I am in a position of advantage.“


How I Attacked ADL

With invention of Christian-persecuting “anti-hate“ laws by the Jewish Anti-Defamation League and full-scale promotion of their federal Hate crimes bill in 1999, I became poised, like Richthofen, to find opportunity to resist.
Frequently it would not be long in coming. This is because evil, not being devoted to truth, will eventually become imbalanced, overconfident in its ability to deceive. Sooner or later, it will rise to extremes of audacity - making it vulnerable.

Around 2008 I was in the midst of spearheading, on talk radio and through e-alerts from Truthtellers.org, national protest against passage of ADL's federal hate bill. I was monitoring ADL director, Abe Foxman very closely, just as ADL was watching me. Suddenly, Foxman spoke out rashly, without basis in fact. Instantly I opened fire on him in an incendiary e-alert. At that time, the internet was still free from political censorship and 46 blogs and websites quickly posted my article!


Social Media Is Going Too Far

Evil Jewish-dominated social media is now rising to unprecedented extremes of arrogant censorship. Such boldness is part of their strategy to condition free Americans to gradually regard censorship and ethical pontification by the Jewish media as a normal, wholesome, and expected part of life. What patriotic Christians need to do is not merely express public disapproval of social media censorship, (a tactic which is proving ineffective). Rather, they should powerfully publicize Jewish ownership of Google/ YouTube/ Instagram, Facebook, Amazon, etc. to as many as will listen. They must do it as if their lives and the lives of their children depend on it, as they surely do! This and only this course of action can hopefully pressure the Jewish media oligarchs enough to cause them to pull back. If enough Americans could muster the courage to boldly speak the word without fear of being called "anti-Semitic", then, what now is a position of advantage for the enemies of free speech could become a colossal blunder - the result of evil going against freedom too quickly and too far.

(In my upcoming article, "The Tyrannosaurus In The Room", I will document Jewish control of the internet giants I have just mentioned. Such evidence is freely available on the internet and should embolden all lovers of freedom to speak out boldly and not backdown!

In early January tens of thousands of conscientious Americans found themselves in a position of great advantage, with a very live possibility of exerting a powerful influence on the Senate. But they did not fully understand that the Christian protester against great forces of evil must be spiritually “fenced with iron“ - II Samuel 23:7, not tearing down fences erected for the public good! As a result, they, and the movement and President they looked to in order to save freedom, are now woefully without advantage. Tragically, the textbooks for future generations will portray Trump and his fanatical “Christian“ followers as attempting to take over the government in order to keep him in office!


Summary: Zeal Is Not Enough

Add “to your knowledge self-control.” - II Peter 1:6
One can have the highest moral principles and intentions, but without good sense and a readiness to hear self-criticism, that of others, and especially the restraint of the Holy Spirit, such moral enthusiasm can lead to disaster.
Believe the Bible And Take Action!
Come to truthtellers.org to learn how!