Throughout the world, the Anti-Defamation League is instant to scream “Hate crime!” against those who criticize religions such as Islam and Judaism, advocating harsh fines and imprisonment. Several years ago ADL’s German hate laws were used in an attempt to extradite Holocaust researcher Dr. Fredrick Toben from Australia to imprisonment in Germany for the “anti-Semitic hate crime” of criticizing Judaism. (See, Toben Grabbed: International Hate Laws Bite)

But ADL is silent when Christianity is publicly mocked and stripped of its sacred symbols in America. How much more is this true in Israel!

Recently a particularly blasphemous anti-Christian video, produced by a private TV station in Israel, soared in popularity on YouTube. Here is the transcript of the show, Toffee VeHa-Gorillah’s episode, The Crucifixion of Yeshu:

Toffee: [Speaking to the viewers] Hello, you’ve made it to the history program of Toffee and the Gorilla. I came to talk about the highlights of the Jewish people—from times past until today. Today we will learn about the crucifixion of Yeshu. Have you heard about Yeshu? [addressed to monkey]

Gorilla: [shouting] I want to assimilate!

Toffee: Do you even know what it is to assimilate? It means to get f****d up with a goyah; this is something that neither me or you, obviously, want.

Gorilla: [shouting] I want for my children to eat Toblerone [chocolate bar] and become goyim; I am bored here, Toffee! I want to live in Switzerland with a goyah and eat Toblerone all day long!

Toffee: Okay, darling, if you love Yeshu so much, then you will have to play Yeshu.

[Title pops up on screen] “The Crucifixion of Yeshu”

Toffee: I am Judas Iscariot.

Gorilla: [shouting] And I am Yeshu. I want for you all to become Christians and eat pork and Toblerone and have fun! Do you, the viewers at home, want too [sic]?

Toffee: Because of this, I will crucify you! How dare you preach to the innocent Jews?

[Cut to the monkey being spread on a cross; monkey is wearing a long wig representing Jesus’ hair; Toffee is hammering a nail through his hands]

Gorilla: [screaming] My God, why have you forsaken me?

Gorilla: [screaming and crying] Toffee! No, Toffee—I am scared! I walked on the water, I transformed crickets into cake. No! I am not Yeshu. This is a mistake. I am Moses, our teacher, do not thrust with nails…Toffee, no!

Toffee: It is only one [nail], you coward…

[Girl hits monkey in the face with a hammer, laughing as monkey continues to scream]

[Monkey groans in death and dies…]

In 2009, another sacrilegious skit on “Tonight with Lior Shlein” was aired on another private station in Israel, channel 10. Here also is its transcript:

Christians tell you that Jesus used to walk on the water of Lake Tiberius. But this is not true! Jesus was so fat that he was ashamed to go out [video of an obese dancing man] so how could he go to the lake in his swimming clothes? Christians show Jesus to you like that [typical painting of Jesus] but these pictures are fake. Christians show Jesus to you like that [painting of Jesus walking on a stormy sea] but these pictures are fake. The truth is, Jesus was [sic] used to eat holly [sic] bread since the age of 3 [overweight baby picture] and he was a heavyweight [picture of an overweight 10 year old wrestler]. He would be like that [picture of a topless, extremely fat man with a large beard and long, frizzy hair] if he got to the age of 40. Don’t believe the Christian church!

[Back to newscaster; screen fades out and back in again on a different day, same newscaster]

Every night we deny something the Christian church tells you, remember, we denied that Jesus could walk on water? And here is the clip again! [Photos of Mary] Christians tell you that Mary, mother of Jesus, was a virgin. But this is not true! The proof is simple, when John the Baptist [images of someone being baptized] used to surprise her with two fingers in her hips, Mary wouldn’t jump! Besides, if Mary really was a virgin, then she wouldn’t show sex toys [images of sex toys] on the evening show with Josephus Flavius! [audience laughing throughout] [Video of an extremely pregnant woman, half-clothed] The truth is, when Mary was 15, she got pregnant from her classmate so her parents wanted to put her in the monastery [video of an ultrasound of an unborn baby]. But since Jesus wasn’t born yet, there was no Christianity and there was no monastery…so Mary’s parents left her in a soccer field [image of a huge soccer stadium], and Mary spent a hot night with Canaan team! Don’t believe Christian Church [sic]! [Audience clapping and cheering loudly]

[Closes with a video of two soldiers who hit a young boy and then carry him off somewhere.]

Both blasphemous pieces strongly remind me of a medieval rabbinic treatise, well known among the Jews, which claims to be an alternative gospel. A copy resides in the Judaic section of the Library of Congress. It’s called the "Toldoth Yeshu: the Gospel of the Jews, the Generations of Jesus."
The Toldoth Yeshu was a frontline Jewish retort to the Christian gospel. Its comforting message was extremely popular with Jews for over a millennium. With Jews persecuted by Crusaders and the Inquisition, the Toldoth encourages them to laugh at Christ. In a fast-moving, witty style, it glorifies Judas Iscariot and leads Jews to identify with him as a heroic figure.

In 1823 a Jewish Toldoth editor, Solomon Bennet, boasted that Jews still believed it as literally as Christians believe the New Testament. Even the 1905 Jewish Encyclopedia repeatedly refers to the Toldoth as an accurate representation of how historic Judaism viewed both Christ and Judas. The Toldoth and its derisive approach were discarded by Jewish apologists in the 20th century. But its content, as we shall see, is still on their lips.

Here is a condensed overview of the Toldoth story.

“There sprung up a certain profligate, worthless fellow by the name of Joseph Pandera,” who lusted after Mary, a hairdresser. Though she was engaged to another man, Joseph repeatedly had sex with her. Out of their adulterous relationship, Jesus was born (ch. 1). The boy Jesus turned out to be so insolent that the Jewish elders “blew 300 trumpets and they proclaimed that he was born of an adulteress and not fit to enter into the congregation. And they called his name Jesus as a sign that he was a man whose name and memory ought to perish.” (ch. 2)

Jesus, they said, sneaked into the temple in Jerusalem and, learned the secret use of the Divine Name of God by which heaven and earth can be created. He became a magician, deceiving the people. But for the intervention of Judas Iscariot, Jesus’ deception and influence might never have been contained. Judas resisted Jesus in an aerial battle, the Toldoth says.

The Toldoth says that even after death by stoning, Jesus had so enchanted all the trees that He couldn’t be hung upon any of them for crucifixion. Again, Judas comes to the rescue of Israel.

“And Judas saw that no tree would receive him, and he said to the wise men, See, the heart of this bastard, for he has enchanted all the trees so as not to receive him. And behold, there is in my garden the stalk of a great cabbage. I will go and bring it, perhaps it will receive him. And the wise men said, Go, do as you have spoken: and Judas agreed, and brought the stalk, and Jesus was hanged upon it…And they buried the bastard in the place where they had stoned him. (ch. 6) And it came to pass in the middle of that night that his disciples came and sat upon his sepulcher and lamented with a great lamentation and wept over him.”

At this juncture, Judas again intervenes. He takes the body of Jesus and uses it as a dam for irrigation in his garden. “And Judas saw this thing, and he took the body and buried it in his garden, in the place of a stream of water. For he turned the water one way for a while and after he had buried him, he turned the stream of water over him as it was at the beginning.”

The rabbis of Israel then came to Judas’ garden and, pulling Jesus’ dead body from the mire, “they tied him to the tail of a horse, and they drew him and brought him before the face of the queen and said, Behold, this is the man of whom you said, that he had ascended into the firmament…And as they brought him by dragging him, the hair of his head was torn off; wherefore the Christian priests now shave their hair in the middle of their heads to remember the words of Jesus.” (ch.7)

The Toldoth ends by relating that, despite the deception of Jesus, his wicked disciples “went into twelve kingdoms, and they spread among them the prophecies of falsehood…And the wise men saw this evil word, and it was very evil to them; for an abomination was done in Israel.”

ADL postures as arch defender of religious tolerance and “civility.” ADL national director Abe Foxman is an Orthodox Jew who contends Judaism epitomizes respect for other faiths. (See, ADL's Foxman: Man of Faith?) But these videos, unprotested by ADL, reveal there is a deep religious intolerance and undying hatred in Talmudic Judaism toward Christianity. Embodied in medieval times through the Toldoth Yeshu, it is still visible today. Christian conservatives are thus reminded that Talmudic Judaism has much more to hide than any other religion.

It cannot realize its dreams of world empire except through denigration of the Founder of Christianity and destruction of all He made possible.


Pages of the Toldoth Jesu from Ted Pike's book, Israel: Our Duty, Our Dilemma: 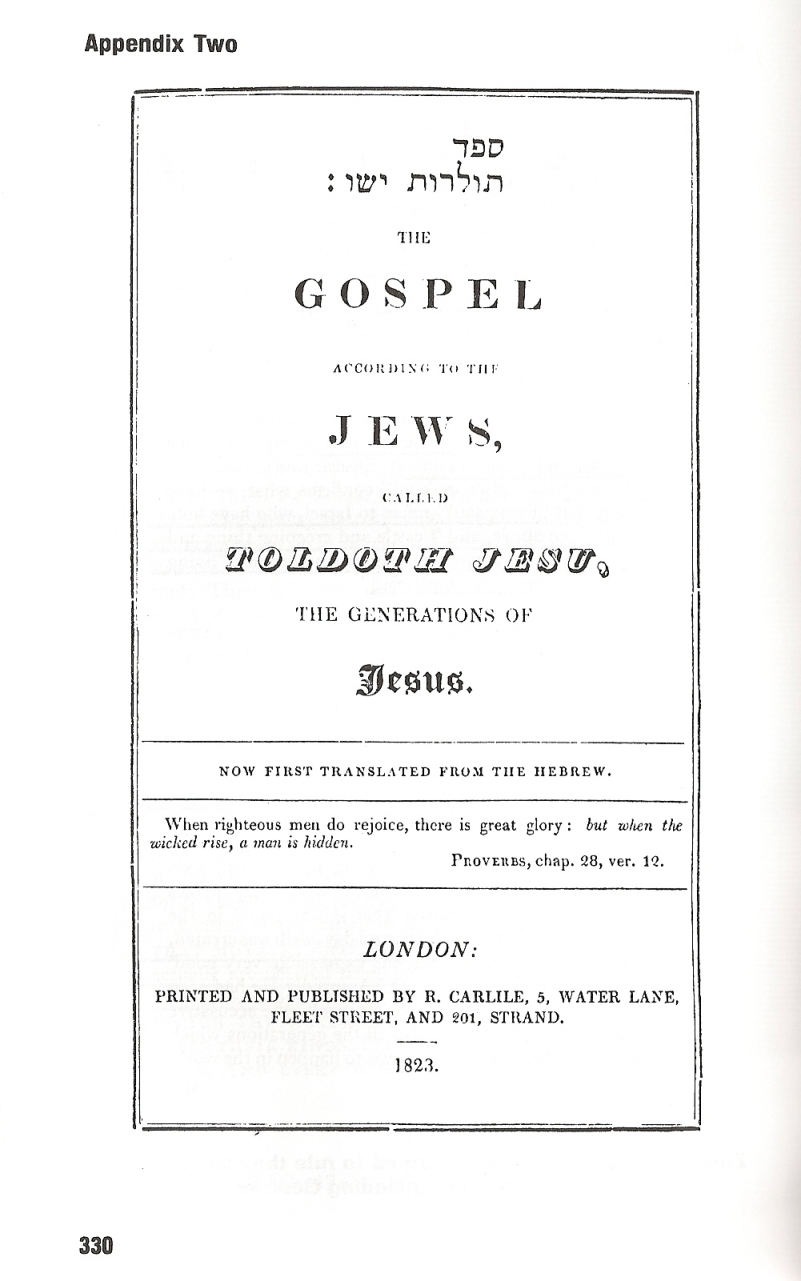 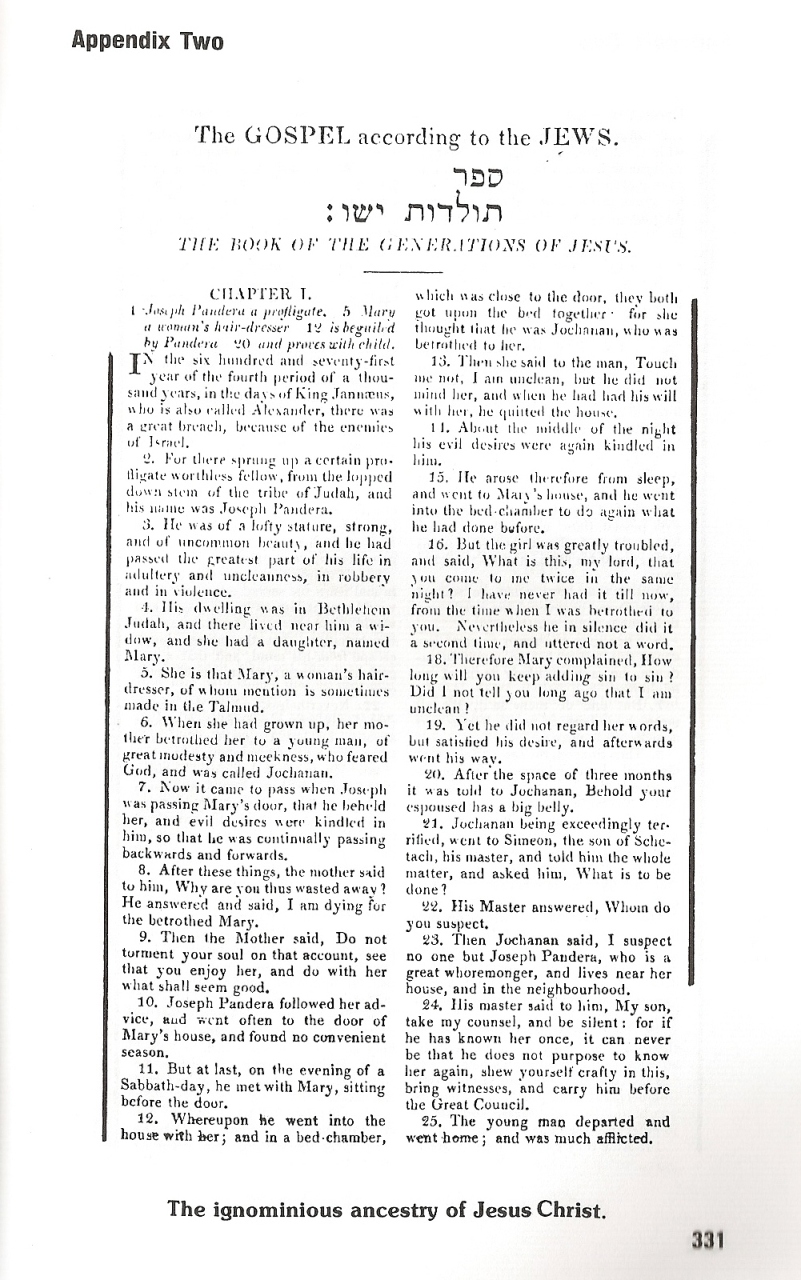 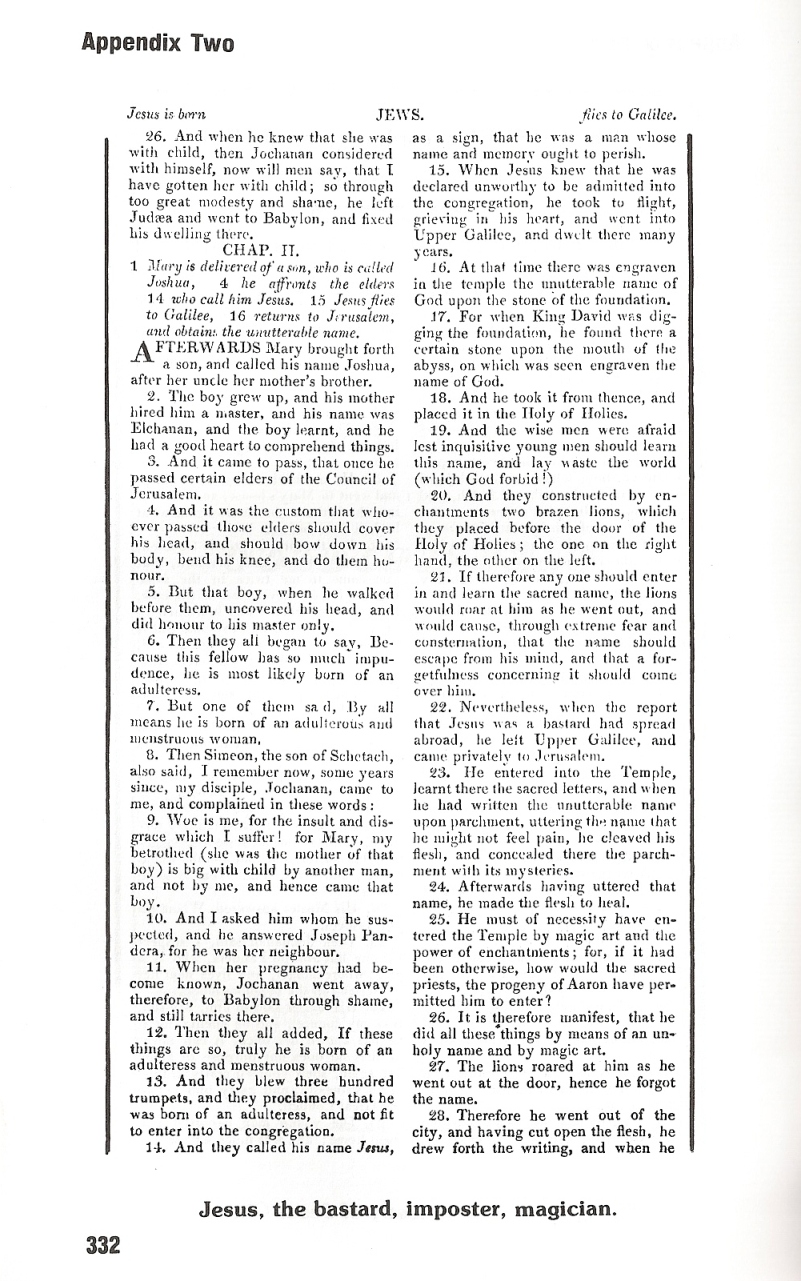 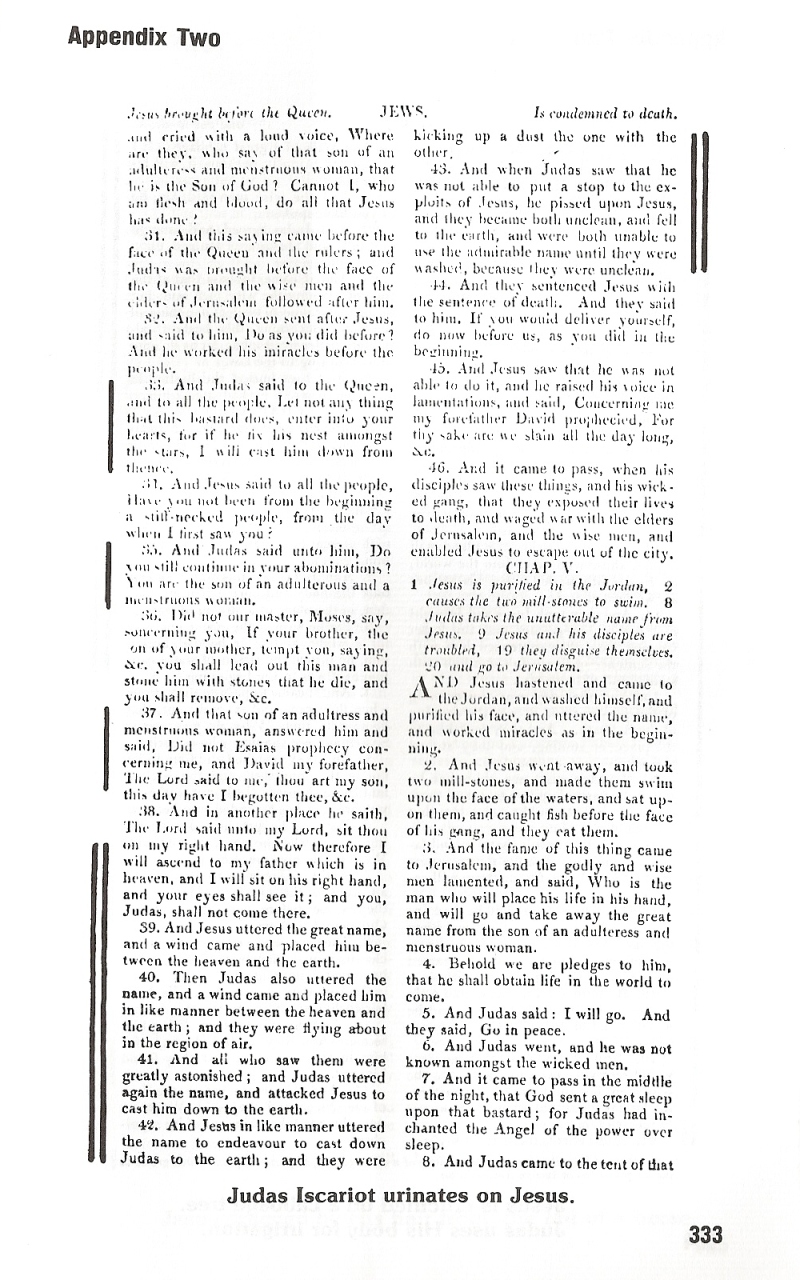 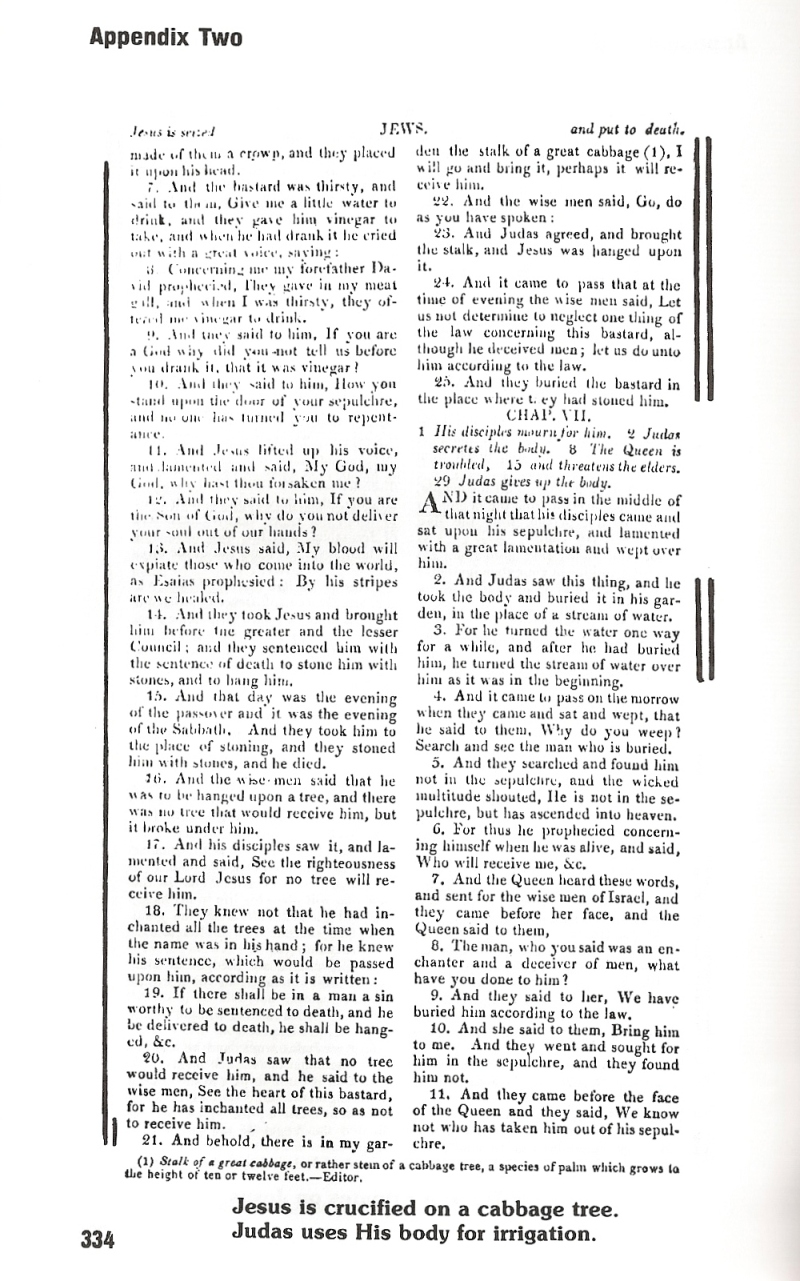 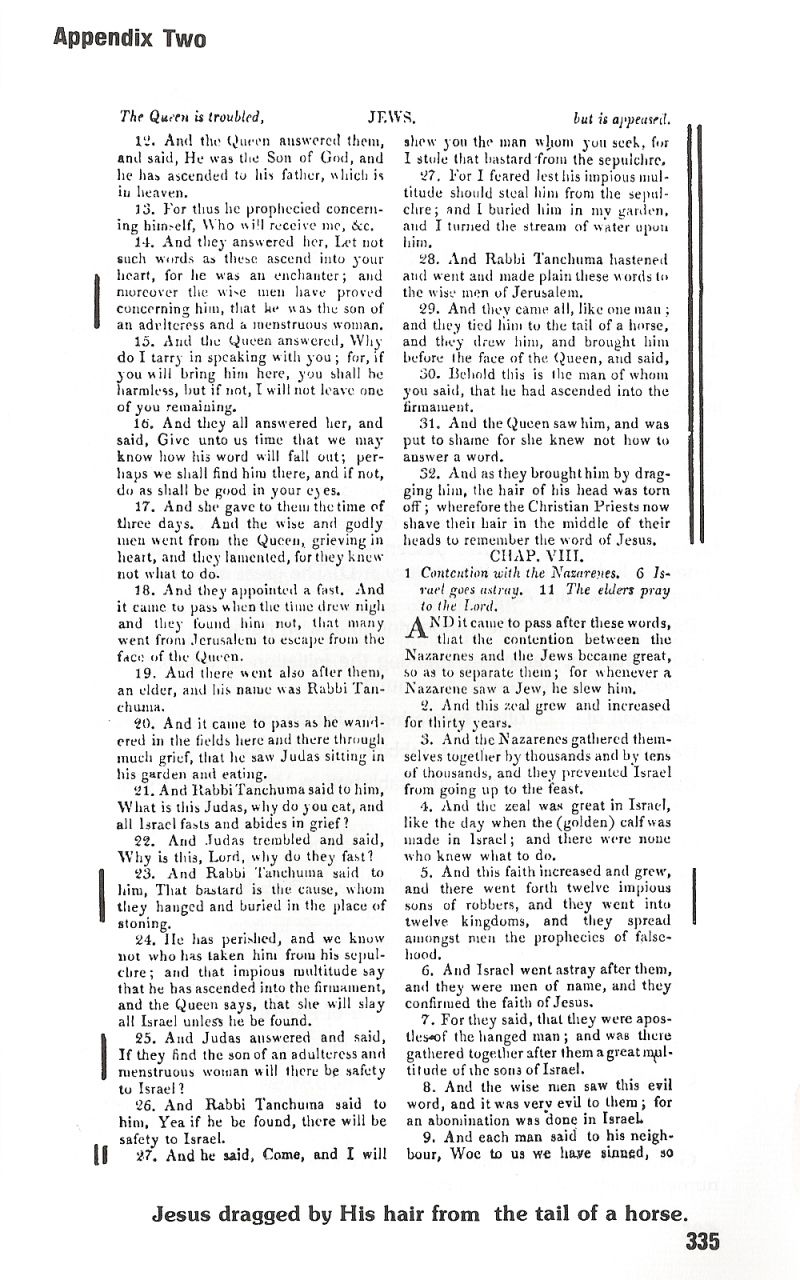