Orthodox Judaism still refuses to abandon the barbaric and disgusting ritual of rabbis sucking the blood of circumcised baby boys which I describe in my June 1, 2011, article.


In our latest audio sermon at Truthtellers.org, I dive into two explosive issues: why God is always male in Scripture and why He demanded the circumcision of every Jewish baby boy.

As the ultimate Sire of all that exists, Christ the Creator embodies the vital role that is male: providing the seed and procreative initiative for life. To foreshadow the assault upon Himself at Calvary, in which, lacerated and bloodied He screamed in anguish, Christ (as Jehovah) required every Hebrew male to experience bloodshed in circumcision and similarly cry out in pain. Anticipating Christ, each male among God's "chosen people" symbolically looked forward to the spiritual deliverance the Messiah would someday bring the sinful Jewish nation. Similarly, every Christian today looks backward remembering Christ's anguish, joyfully bearing our cross of possible suffering and shame.

Circumcision is thus not inscrutable. It is not a baffling deviance of a primitive “slaughterhouse” religion. It also did not exist primarily for hygienic reasons. Circumcision symbolized the momentous fact that the Jewish people existed to herald the Messiah.

This ritual was central to God’s covenant with the Jews. If Jews obeyed God as did their father Abraham, that covenant would remain (Genesis 18:9). Israel would then help reconcile to God every person on the planet who will trust and obey Him.

Tragically, the unbelieving Jewish majority rejected Christ’s conditional terms of covenant and the true significance of circumcision. They made this act a legalistic fetish, even a source of racial pride. (King Saul was abandoned by God for refusing to obey. Yet even in his suicide he was proud of his circumcision, preferring to kill himself than die at the hands of “uncircumcised” Philistines (I Sam. 31:4).) It was bad enough that rebellious Jews inflicted the very anguish on Christ that circumcision was meant to symbolize. Yet, incredibly, many Talmudic rabbis today do even more violence to this spiritually-laden rite.

Primarily Orthodox leaders of those Christ called “the synagogue of Satan” (Rev. 3:9) actually put their mouths around the newly circumcised penis, sucking the blood and then expelling it! At the Jewish (Orthodox) information website “Ask Moses.com” Rabbi Yosef Loschak in his article “Why Does a Mohel {Circumcising Rabbi} Suck Blood after Circumcision?” says:

This practice is part of the ritual of circumcision and it is called Metzitza. The source . . . is from the Talmud. The Code of Jewish law does not explicitly mention how Metzitza is to be performed. There is actually great debate amongst the rabbis today as well as through the ages, regarding the details of Metzitza. As a result, some Mohelen use a tube and some do it by mouth. 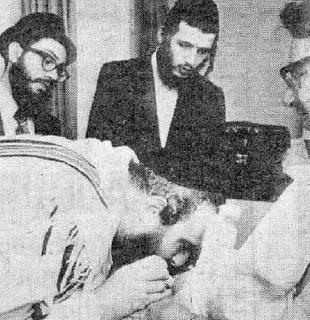 The Old Testament says Jesus is the “Sacrificial Lamb” slain from the foundation of the world. His shed blood was symbolized and anticipated by animal sacrifices under the Mosaic Law. Yet the Jewish Kabbalah (Zohar 2,43a) says the “sacrificial lamb” is the Jewish people. Their suffering under Gentile persecution actually atones for Gentiles, allowing them to continue living!

"The Ass means non-Jew who is to be redeemed by the offering of a lamb, which is the dispersed sheep of Israel. But if he refuses to be redeemed, then break his skull. . .they should be taken out of the book of the living."(Zohar 2,43a; Rev. I.B, Pranaitis, “The Talmud Unmasked’, pg. 83)

Sucking the newborn’s blood establishes the ownership by the synagogue of Satan of every male Jewish child. It reverses the original intent of circumcision that “every male child that openeth the womb” is consecrated to Israel’s true Life-Giver, Jesus.

Rabbi Menachem Schneerson—prominent Messiah-figure to countless Ultra-Orthodox (Kabbalistic) Jews—gave another reason that rabbis must suck some of the blood out of a Jewish baby boy. It is "the blood of the Covenant." Since every Jew, according to the Zohar, is semi-divine, his precious blood in the mouth of the Moleh (not the blood of Jesus at Calvary) is the redeeming power of the world (Tikun-olam) – repairing it from Gentile and Christian induced chaos. This deeply anti-Christ point of view ascribes to those of Jewish blood the power to redeem the world. It thus repudiates everything circumcision stood for – that the “blood of the Covenant” belongs to Jesus alone.

It shakes the unbelieving Jewish fist at Christ Himself.