My hate laws flyer is waking up members of Congress! A copy of a letter from Congressman John Boozman was recently sent to me. It shows the power of “Anti-Hate Laws Will Make You a Criminal” to persuade lawmakers against the federal hate crimes bill, H.R. 254, now in the House Judiciary.

Rep. Boozman begins his reply like most misinformed politicians on Capitol Hill. He asserts that H.R. 254, “David’s Law,” merely wants to empower the government to punish violent hate crimes in the States. But then, in a virtual paraphrase of my flyer, Boozman says “many are concerned because of legal precedents that similar ‘hate crime’ legislation has led to in other countries. In countries such as Canada and Great Britain, ‘verbal violence’ against a person based on faith, race, national origin, gender, disability or sexual orientation has become criminal under law. This brings up serious concerns for protecting Americans’ freedom of speech.”

Boozman concludes the letter by reservedly telling his constituent, Ed Garrett, he will “keep your thoughts in mind.” But then, hand-written, Boozman adds, “I will vote NO!”

Boozman’s letter is the first word I have read from a member of Congress warning against what has happened under similar ‘hate crimes’ legislation in other countries. It is clear Boozman and probably his legislative aides absorbed the logic, argumentation, and even some phraseology from my flyer. It is not an easy task to persuade a very busy and distracted politician away from the usual cant in favor of the hate bill. Yet, despite ADL propaganda, this politician has been resoundingly persuaded!

Also significant is Boozman’s observation that “many are concerned” about the possibility that a federal hate law, originally passed to end violent hate crimes, might, as a result of legal precedents, broaden to criminalize “verbal violence” (i.e., unpleasant speech.) Who are the “many” critics Boozman refers to? Callers protesting H.R.254! The American Family Association alone estimates that perhaps two million of its members expressed disapproval to Congress. Boozman may also be alluding to his many Congressional colleagues, including their legislative staffs. I believe his letter reflects growing apprehension about the hate bill among both Democrats and Republicans in Congress. Call Democrats' offices, and they will likely minimize the number of calls protesting the hate bill. Call Republicans, and most will tell you protest is heavy. Fortunately, after a brief lull, we are told calls are heavy again.


Conscience of a Congressman

Many callers to the radio talk shows on which I speak are skeptical that any member of Congress listens to his constituents - or even his own conscience. Yet Boozman’s letter is proof to the contrary. It should powerfully encourage lovers of freedom to keep sending my hate laws flyer, available at www.truthtellers.org, to all three members of Congress from their district. Send it also to their legislative staff members. (Total flyers to be mailed: about 24.) This flyer was designed to convince legal and legislative experts within House and Senate offices through argumentation that cannot be resisted. It may be more compelling to this audience than calls, no matter how numerous.

There is even more we can do to arouse Congressional opposition to the bill. Many Republicans in Congress, perhaps from your district, oppose the hate bill. If you are one of their constituents, why not write, fax, or email them suggesting they do more than simply vote against the hate bill? Encourage them to further research this issue at www.truthtellers.org and plan to speak out on the floor of the House or Senate.

Also, impress on your elected representatives the urgent need for congressional hearings on the "anti-hate" bill. This momentous legislation, leading to a radically new “bias-orientation” justice system and end of states’ rights in law enforcement, is being ramrodded through Congress with neither the knowledge nor consent of the American people. Hate crimes experts, such as legislative researcher Robert L. Knight and Canadian free speech leader Paul Fromm, should be invited to explain the fallacies and consequences of hate laws, especially focusing on the Canadian experience over the past 37 years. The hate bill’s only chance of passing is to advance swiftly, silently, with Congress ignorant of its real intention. If the opposite happens and feisty Republicans take to the floor, informing members of what happened in Canada, Europe, and Australia, then the Anti-Defamation League’s hopes of passage are doomed. It may well be that if H.R. 254 cannot pass Congress, even under such favorable circumstances (Democratic control), then the hate bill, at least in its present form, may never be resurrected.

Few members of Congress have the courage to mount an offensive unless they are assured of support from constituents. It is important that you thank and encourage them. The conversion of Rep. Boozman to hate bill opponent is a powerful reminder that, if the people rise up and take action, they can still change the direction and destiny of America. The Power of the People is not just a forgotten memory. It may slumber, but it can yet be incited to erupt in volcanic fury. Armed with the power of God and the whole truth, the will of the people can yet become an irresistible force -- a force no government can defy or restrain. 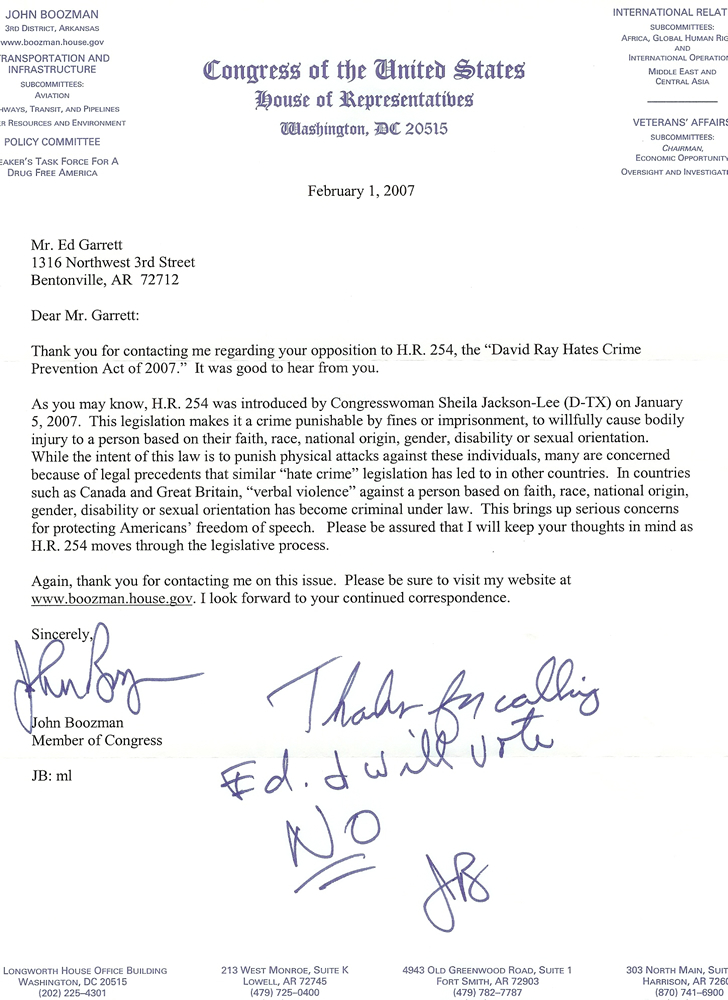