I was extremely reluctant to share the horror story of my wife Alynn’s death (See Ted Pike: My Wife Died a Martyr for God and Freedom). I feared the end of my credibility, especially to my large secular audience worldwide. But I have been astonished and grateful for the overwhelmingly sympathetic response. Almost all believed me and expressed thanks for my warning of the unprecedented boldness of demons as we near Christ’s return.

To a minority, my account is troubling. It doesn’t fit with the evangelical belief that God will allow Satan to buffet Christians’ bodies but never allow him to control our minds. This means God wouldn’t let demons drive Alynn insane and kill her if we were righteous. We must be guilty of secret sin. Job faced similar accusation from three “friends” who did not believe a good God would allow Satan to afflict him if he were truly righteous.

Yet our record, like that of Job, does not show wrongdoing. Our lives have been spent in service to the church and nation and emphasis on God’s requirement of holiness.

Recently, an article by Rich Porter was published on Dr. Henry Makow’s website which tries to “expose” sin in the life of Alynn and me. Porter says, “Beware of the Ted Pike demonic possession story. As a Christian, alarm bells go off like crazy here.” Porter charges I am not a Christian and am insane. He says Alynn, if possessed, was “sold out to spiritual devils…a spiritual whore” and that I too am a spiritual whore.

This is beneath response.

For Porter, the “proof” of our evil is found in my art. He claims my “Paraclete” sculpture, which portrays the Holy Spirit, is also the goat-like figure of Baphomet, which represents Satan in secret masonic teachings. He claims there is an erection on the male in my family sculpture and that “the shape of the mother [in my mother-and-child sculpture] holding the child appears to form the "womb" of semiramis.” (Semiramis was a mythical Babylonian queen.) Porter claims—on the basis of a recent article he read—that I may be a high-level mason who must do some good works to balance out my deviltry.

Nevertheless, I am happy to take this opportunity to discuss the real influences behind my art.


Actual Influences on My Sculpture

Here are primary influences I absorbed in creation of the three sculptures Porter vilifies: 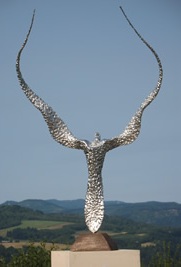 This large (71 inches), polished stainless steel sculpture is my conception of the “Comforter,” or Holy Spirit, portrayed in John 1:32 as a dove descending from heaven on Christ. It has a very tiny head, eyes, and beak. A proportionately small head has been used throughout the history of art to create a sense of monumentality. The wings of this fiery ethereal being encircle the entire universe in omniscient love.

I made this piece in plaster of paris in 1969 at the age of 23. Cast both in bronze and stainless steel, it has been publicly viewed and appreciated by many thousands. I remember only one person commenting that its wings might suggest anything other than wings: antlers. Yet I never imagined an interpretation more ludicrous and vicious than that this work, meant to glorify the Spirit of God and teach of His all-encompassing comfort, represents the goat god of Satanism!

The dominant influence behind this sculpture is British abstract sculptor Henry Moore’s revolutionary idea of the “concept sculpture,” particularly the idea of a form within a form. This work attempts to embody the same relationship as a pearl in the halves of an oyster shell: Both halves (man and woman) interact around the precious baby inside.

I have also been under the influence of German expressionist graphic artist and sculptor Kathe Kollwitz. She dramatically revealed the power and importance of emotion to modern art in her rather grim mother-and-child works. A driving curiosity of mine has been to see how simple concepts can be united with powerful emotion to create very moving works of art. There has been a poverty of uplifting human emotion in modern art over the past century. I am convinced that unification of form with intense emotion is a high objective for any artist. You can decide how well I succeed in this unfinished work.

Porter says that there appears to be an erection in the male statue “family.” Do you see it? Only a person as anxious to accuse as Porter would "see" what has never existed. Why would I ruin my art, into which I have put many years, with such obscenity? 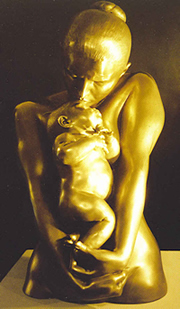 I first conceived this work at age 20. It was inspired by the head of a wasp – the beautiful eyes resembling human shoulders. It is my attempt to universalize the idea of motherhood. Traditional mother-and-child sculptures usually place the child on the mother’s lap or lifted in her arms. I wanted to show maternity like a yolk inside an egg or a seed inside a pod, to go much deeper into our primal emotions.

Decades ago, seeing a picture of it, governor of Oregon Victor Atiyeh exclaimed, “Now that’s art!” He asked to display it in his outer office where it remained Oregon’s unofficial symbol during the United Nations’ “Year of the Child.”

Kathe Kollwitz
"Death and the Mother"

Alynn’s death at the hands of demons has clearly sparked discussion of how much God will allow Christians to suffer. This is important because the Bible predicts withering persecution of Christians in the last days. Scripture tells Christians that “as Christ hath suffered for us in the flesh, arm yourselves with the same mind” (1 Peter 4:1). Christians must accept the possibility that Jesus will someday honor us to suffer the same prison sentences, torture and even martyrdom that millions of other Christians, especially under Communism, have endured and still endure today.

Yet the American church is not ready. Western Christianity today combines a little true doctrine with a lot of American dream. This explains why so many believe Jesus will return in the nick of time to elevator-lift His whole church out through “rapture.” Some, like Porter, don’t want their comfortable yet unbiblical notion that Satan can’t control our mind exposed for the myth it is. If what Alynn and I say is true, others might be required to suffer in a way that baffles orthodoxy and even defies belief.

I believe my wife died as a warning to the church to whiten her garments and ready herself for persecution. As Ezekiel was sent to “cause consternation” among the exiled Jews, challenging them to repent and search their souls deeply, so our testimony is causing consternation (Ezek. 3:15). When persecution comes, Christ does not want us disoriented or disillusioned. He wants us to have the sound mind of confident leaders, capable of using persecution to bring many to righteousness.

For much more discussion of what I consider the biblical response to the ordeal Alynn went through, listen to my latest Bible study: “Could an Exorcist have saved Alynn Pike’s Life?”