DOES GOD FORBID A PALESTINIAN STATE? 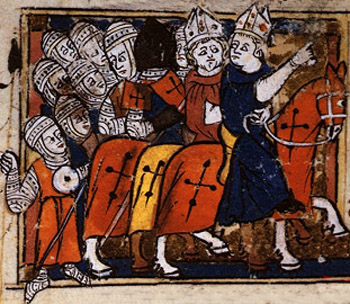 In the 11th century A.D. a great shout arose from European Christendom: "It is the will of God!" that Christians march to Palestine to deliver its "holy places" from occupation by Arab "infidels."

A similar conviction rules pro-Zionist evangelicals today: "It is the will of God!" that Arab "infidels" not divide the land of Israel, establishing a Palestinian state.

What is God's will concerning attempts by a possible 140 UN nations to partition Israel and create a Palestinian state based on Israel's pre-1967 borders?

The Bible is clear that Gentile occupation of Israel is God’s will during those periods that Jews have been exiled because of their sins. For Christian believers, it is not something to protest but to accept. The crusaders should have known (if the Bible had been available to them in their own languages) that any Arab sacrilege in Palestine will be resolved when Christ returns. Until then, the proper business of the Christian is to spiritually battle with satanic powers of darkness in the hearts of men on the home front, not joust with “infidels” in the Mideast!

Yet the church is now responding to Gentile intrusion in Palestine in the same pseudo-spiritual way, a way that is still full of potential for disaster. What God really abhors is the spiritual defilement of Palestine by a nation of Christ-rejecting Jews who scorn their true Messiah, Jesus, and exalt those who crucified Him, the Pharisees. Unfortunately, in the last 1900 years the Christian church seems to have made no progress in viewing occupation of Israel Biblically. Scripture indicates that if the land of Palestine is not inhabited by spiritually obedient Jews then God sanctions tenancy by the peoples of any nation who are not overtly wicked. (See, Palestinians: Their History from Beginning to End, and Almost Anyone Can Occupy Palestine) They may remain in Israel as a nation until a remnant of Jews repents and turns to Christ at His second coming. Then, and only then, will Gentiles lose their rights of tenancy as Christ leads them to other locations, making room for the repentant children of Israel to occupy Palestine with Him for 1,000 years.

This spiritual, Biblical point of view should be the church’s position today, as the United Nations attempt to finish what it failed to accomplish in 1948. For Christians to cling to a physical, racial criterion of Israel’s borders today, as do Zionist Jews, is to insult God’s law of “no obedience, no land,” repeated dozens of times in Scripture (See, Conditional Salvation/Occupation Verses). 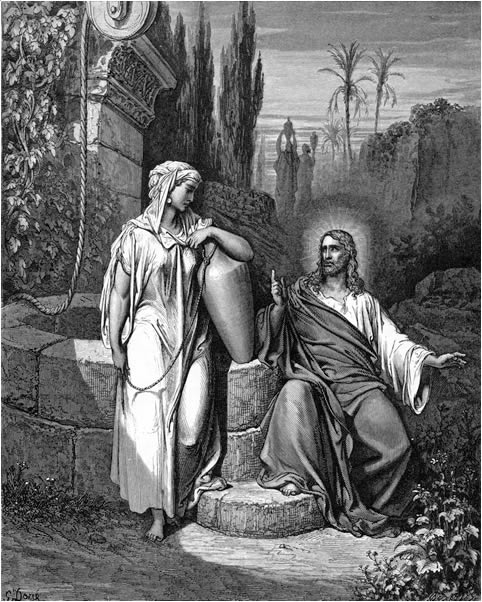 As a result of deportation of Jews from Palestine under the Assyrians (722 B.C.) and Chaldeans (597 B.C.), Gentile immigrants occupied the northern and southern kingdoms. They were allowed in by God during the 70 years of exile begun by Nebuchadnezzar. Yet, as the returning obedient Jewish exiles from Babylon under Ezra and Nehemiah discovered, such immigrants were a thorn of resistance. However, even in the time of Christ, 500 years later, there was general consensus among the Jews that the despised, theologically confused “Samaritans” were, because of Israel’s past and present sins, to be tolerated and not expelled. In the seventh century AD, after Muslim conquest of the Mideast, the Samaritans were joined by a mass infusion of Arabs. With the vast majority of Jews dispossessed to the nations, such direct ancestors of the Palestinians also enjoyed God’s tacit permission to occupy and tend Palestine until that time when a remnant of Jews will at last trust Jesus.

What God truly values concerning Palestine has always been its potential as a place where divine values of obedience, justice and mercy are exemplified. In its beginning, in a sea of pagan ignorance and abomination, God intended Israel to provide a land and people receptive to Christ when He came, eager to share His message of salvation with the rest of humanity. Today, Palestine and the Jewish nation are not active instruments of redemption by Christ. The Messiah bade farewell to the Jewish people two millennia ago, solemnly warning that they would never see Him again or experience His guidance (let alone military assistance helping them win wars) until they say, “Blessed is He that comes in the name of the Lord.” The whole emphasis of the New Testament conflicts with the obsessive protectionism of Israel which enthralls many evangelicals today. Instead, New Testament Christianity radiates outward, away from derelict Jerusalem, in outreach to a lost world.

Evangelical Judao-centrism thus is not upheld by Scriptural precedent. Instead, near-worship of Jews by Christians began as a result of Jewish propaganda. As the 20th century began, a host of Jewish organizations in America solicited sympathy from evangelicals toward Jews allegedly suffering "vicious, mindless" persecution and pogroms under the czar in Russia. Western Christians were entreated to do their best to assist Jews to safety, preferably in Palestine.

Actually, "persecuted" eastern European Jews were, to a very large extent, hated not because they were Jewish but communist, attempting and finally succeeding in overthrowing the Romanov dynasty. The eastern European Jewish community had been rife with socialist ferment well before the abortive 1905 Russian Revolution. Yet, the Encyclopedia Judaica in its article on Communism (page 791) says the "anti-Semitic" counteroffensive of the White Russian armies in 1918 "drove the bulk of Jewish youth into the ranks of the Bolshevik regime." Bolshevism had become the Jewish cause as "communist tendencies became widespread in virtually all Jewish communities." (See, Jewish Activists Created Communism)

Bible-belt evangelical leaders knew little of the Marxist make-up of modern Jewry and perhaps didn't care. The issue was clear: "It is the will of God!" that Christians rally to support a return of all persecuted Jews to the safety of a national homeland in Palestine.


Israel Was Never the Mission of the Church 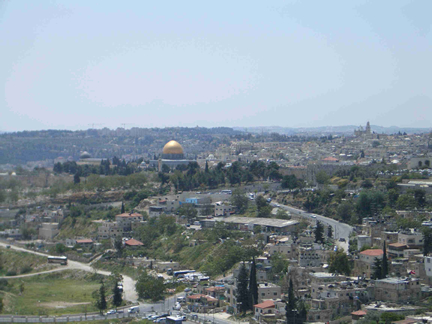 In reality, the New Testament never makes Jewish national protection central to the mission of the church. Israel, the proverbial "fig tree" withered by Christ, is viewed as, for the present, nationally abandoned by God. Jerusalem, once the “city of peace,” “the city of the Great King,” is now “Sodom and Egypt,” (Rev. 11:8) the gutted hulk of the city Solomon made God's glory to the nations. Today, the land of Israel and unrepentant Jewry hold greatest eschatological importance because of what Christ will do with them someday. He will transform both land and people but only after repentance. Moses described the Jews as an unusually "stiff-necked" rebellious race. To deal with such hardness of heart, Christ predicted "wrath upon this people" (Luke 21:27) under the whip hand of invading Gentiles. Unimaginable Jewish suffering during the "great tribulation," redeemed by the infilling grace of the Holy Spirit and visible appearance of Christ in the skies, will at last exhaust Jewish rebellion.

By describing Jerusalem as "Sodom and Egypt," the personification of the sexual perversion of ancient Sodom and the occultry of Egypt, Christ reveals His contempt for a man-made city void of faith. When Scripture commands Christians to “pray for the peace of Jerusalem,” it cannot mean to pray for a city now infested with Christ-hating rabbis who outlaw Christian evangelism. Instead, as Christians and the spiritual "children of Abraham" (Gal. 3), we honor and pray for what St. Paul calls “the Jerusalem that is from above.” (Gal.4:26) Christ said “the kingdom of God is within you.” Christ’s continuing agenda is to create a “new Jerusalem” of saints, both Gentile and Jewish, who yearn to spiritually fulfill what earthly Jerusalem and its inhabitants failed to accomplish, killing its Messiah when He came.

God is not passionately protective of Mideast real estate that was once vital to His plans (and will be again) but now remains "desolate," vacant of His blessing (Lk.13:35). To elevate the territorial unity of Israel as a rallying cause for Christendom is to literally return to the spiritual ignorance, emotionalism and materialist impulses of the medieval crusaders, with renewed potential for the mass disaster that came upon them because they also were ignorant of God's law.

Today, from the pages of a Bible open to all, we know occupation of a generous portion of Israel by Gentiles is NOT sacrilegious, not at all undermining His plan of the ages.

Jesus said that His Father desired that we worship Him "in spirit and in truth.” Pro-Zionist evangelicalism over the past century has failed to ascend to the oft-repeated, spiritual demands of Scripture, that without obedience to God the Jewish nation never had occupation rights to Palestine and never will. Instead, a hundred years ago, a manifestly fleshly church gravitated unquestioningly to agree with Christ-reviling Zionist Jews that God no longer insists upon national Jewish obedience as a prerequisite to occupation. Evangelicals then and now agree with Zionists that God’s covenant to give Abraham title to the land settles the question of occupation and rights, setting aside His eternal requirement that Jews obey.

St. Paul said if Christians walk in obedience to the Holy Spirit He will bring life and peace. But if our premises come from the flesh, or from fleshly Jews, we shall die. After more than two decades of Mideast wars fought to make the region safe for Israel (decisions for war largely made by “born-again,” Israel-first President George W. Bush), it is hard not to conclude that Zionist-furnished arguments indeed lead to death. The thousands of body bags brought home from Iraq and Afghanistan prove it.

But God is giving American evangelicals another chance. Will they continue in Zionist lockstep, repeating unbiblical, pseudo-religious mistakes as old as the crusaders, as new as Hagee and Beck?

Without a doubt, they will. But I could hope that perhaps a few Christian evangelicals will be challenged to do what is unthinkable for Hagee and his tens of millions of "Israel-first" followers. That is to become a "Bible-believing" Christian who really believes the Bible's conditional terms for Jewish occupation – and its dire warnings against apostate Judaism.