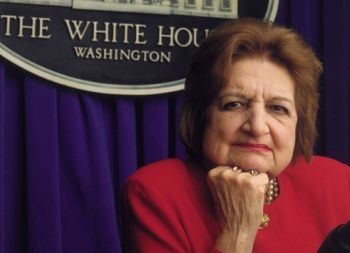 Helen Thomas, veteran Washington journalist and political insider, has done it again—spoken the whole truth about Jewish supremacism’s control of America. In a speech to an Arab-American group in Detroit she said, LINK (ALLEGEDLY) ERASED BY UNIT 8200 OPERATORS! LAST SNAPSHOT FOUND ON WEB.ARCHIVE.ORG WAYBACK MACHINE

I can call a president of the United States anything in the book but I can't touch Israel, which has Jewish-only roads in the West Bank. No American would tolerate that -- white-only roads… We are owned by the propagandists against the Arabs. There’s no question about that. Congress, the White House and Hollywood, Wall Street are owned by the Zionists. No question in my opinion. They put their money where their mouth is…We’re being pushed into a wrong direction in every way.

Thomas defiantly stands by the statement that ended her journalistic career in May when she said the Israelis should “get the h--- out of Palestine” and “go home” to “Poland, Germany, and America, and everywhere else.” Now she says, “I paid the price for that. But it was worth it, to speak the truth.”

Of Lebanese Arab (Semitic) descent, Thomas answered the accusation that she is anti-Semitic.

I’d say I’m a Semite. What are you talking about…We all know the Arabs are maligned. They are automatically terrorists. I was called the Hizballah at the White House, Hamas, and everything else. But I never bowed to those kinds of slurs because I know who I am. I am an American.

Denying that Arabs in general are terrorists, Thomas said it was former Israeli leader “Menachim Begin who created terrorism. They bragged in his first book, about creating the modus operandi for terrorists.”

She adds that Zionists have to understand Palestine belongs to Arabs, too. “Palestinians were there long before any European Zionists.”

Thomas commented on the folly of appointing a Zionist Jew in charge of Mideast affairs. “Obama, he puts in charge for the Arab world a Zionist like Dennis Ross. You don’t put a Zionist in charge of the Muslim world in the White House.”

She also commented on the folly of US involvement in Mideast wars (fought to make the Mideast safe for Israel). Thomas said the war in Iraq was “built on lies.”

Seven years of war now with Iraq. They did nothing to us. They are totally innocent, and they were just demonized. I'm not saying Saddam Hussein wasn't a terrible man. But how many thousands of Iraqis did you kill, for what reason?…They've never explained the war. No weapons of mass destruction. No ties to Al-Qaeda. What is this? Why are we killing those people? And why are we there?
We teach our children to be good citizens, never kill, never lie, never do bad things, and yet in 3-4 weeks, we train them to go and kill people half way around the world, and still have yet to give them a good reason to kill and die.

Predictably, the Anti-Defamation League issued an immediate protest, labeling Thomas anti-Semitic and calling for rescinding of all her many honors and awards from journalistic and educational institutions nationwide.

Helen Thomas has clearly, unequivocally revealed herself as a vulgar anti-Semite. Her suggestion that Zionists control government, finance and Hollywood is nothing less than classic, garden-variety anti-Semitism. This is a sad final chapter to an otherwise illustrious career. Unlike her previous, spontaneous remarks into a camera, these words were carefully thought out and conscious. It shows a prejudice that is deep-seated and obsessive.

While we will never know what the hidden trigger was that led Thomas to reveal her prejudice, it is troubling that for more than 60 years she has made a pretense of impartiality as a journalist with a large megaphone. It makes it even that much more horrendous and horrific that she is now using that megaphone to release her prejudice in its crudest, most vulgar form. Through her words and deeds she has besmirched both herself and her profession.

It is time for those schools and professional organizations that have honored Thomas in one form or another over the years to consider rescinding those honors in light of her pervasively anti-Semitic rhetoric. Professional associations and academic institutions should not want to be associated with an anti-Semite.

Ironically, Thomas’ remarks follow closely on virulent attacks by the Jewish Southern Poverty Law Center on 18 Christian/conservative watchdog organizations in America. SPLC is accusing them of being “hate groups” which government, police and media should especially monitor. ADL, piously instructing Tea Partiers in “civility and restraint,” breathes not a word of criticism of SPLC’s vicious stereotyping of the “homophobic” right.

Responses from Christian conservative leaders to SPLC’s attack are predictably weak. No one dares mention that SPLC is 100 percent Jewish, although SPLC repeatedly attacks Christians for what they are. Tony Perkins, head of Family Research Council, was the boldest. He demanded an apology from SPLC. Joseph Farah blusters but also can’t bring himself to utter the forbidden J-word. In fact, WorldNetDaily, quoting Foxman, joins ADL in mocking and deriding Thomas as anti-Semitic.

That leaves crusty, 90-year-old Helen Thomas as the only truth-teller among those violently attacked by ADL/SPLC over the past week. Not valuing her lost legacy of honors and position as a columnist for Hearst, she boldly proves that speaking the whole truth means the most to her. Of much greater courage and integrity than “Christian” leaders in America today, she may well be the bravest woman in public life in our time.

A little old lady shall lead them.