IN SEARCH OF ‘HOMEGROWN TERRORISTS’ 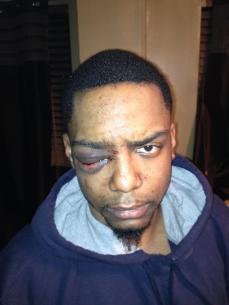 After not resisting arrest…

Senator Edward Kennedy said: “Every hate crime is an act of domestic terrorism.” Earlier this month a dozen or more members of New York Hasidic Jewry’s “Shomrim” police, without provocation, took chase against a black homosexual college student, Taj Patterson. They ran him down, dragged him between cars, and beat him severely, fracturing his eye socket and tearing his retina.

Surely, according to Kennedy’s definition, this terrifying, bias-motivated hate crime would also be an active of domestic terrorism. Yet Patterson, facing more surgery, agrees with his lawyer that New York police are not even searching for the Shomrim “domestic terrorists” who caused him terror. Why? Because, as I have detailed in my recent three-part article, “Crime, Fraud Soar Among Hasidic Jews,” Jewish power is now so great in New York City that police are afraid to penetrate densely controlled Jewish districts, even in search of domestic hate criminals.

As I point out in my 2007 article, the Anti-Defamation League in its federal hate crimes law exempts Jews from any possibility of indictment as hate or domestic terror criminals. In contrast, ADL relentlessly contrives to make hate criminals and domestic terrorists out of members of the religious and anti-Zionist right.

The House of Representatives passed H.R. 1955 on Oct. 24, approving the creation of a federal commission to study prevention of “home-grown terrorism.” The bill says this threat, leading to acts of violence against the US government and its citizens, pervades the internet and streams its propaganda incessantly to Americans. This bill will supposedly prevent Americans from being enticed by "extremism" and "radicalized" to commit bias-motivated violence. H. R. 1955 implies that the government should proactively educate the public against “extremist” individuals and organizations, until their threat is “eradicated.&lr H. R. 1955 includes as “homegrown terrorists” foreign conspirators who primarily live and operate in the US. Yet they are not its main concern. On the surface, this bill opposes radicalization of Muslims living in America (probably from terrorist websites originating in the Mideast). But there is little evidence that many American Muslims are dangerously influenced by such propaganda.

What’s the real target of this thought control bill? Hundreds of thousands of Americans are daily influenced to think critically about Zionist control and influence by a number of internet radio networks, including Genesis and Republic. H.R. 1955 is an attempt to silence burgeoning anti-Zionist talk radio, which streams worldwide in ever-increasing competition to Jewish media.

I wanted to learn more about the “serious national problem” which prompted action from all but six House members and preoccupies Senate hearings. I called the FBI to ask their definition of a “homegrown terrorist.” FBI's authority on domestic terrorism in the Portland, OR office said she was unfamiliar with the term. She thought a moment and suggested the Oklahoma City bombers and also eco-terrorists who sabotage logging operations and commercial developments in wilderness areas. She could think of no other examples.

“Why not call your House member and ask?” she suggested. “Maybe Congress was given information the rest of us don’t have.”

I called my congressman, Earl Blumenauer, D-Oregon. His staffer cited six immigrants of Yugoslav and Mid-East origin who conspired to blow up Ft. Dix in New Jersey and also Muslims in England, such as the Arab doctors who tried to bomb the Glasgow airport last summer.

“These aren’t ‘homegrown.‘ I objected, “They were immigrants living in the countries they attempt to sabotage.”

Blumenauer’s staffer couldn’t think of any terrorists who were truly homegrown in the United States. He said, however, that Rep. Blumenauer voted for the bill so that those who might incite bias-motivated violence and sabotage could be studied and prevented from influencing others.

The closest I came to an accurate description of bona fide homegrown terrorists was from former US Attorney General Alberto Gonzales and FBI director Robert Mueller.

Last year Gonzalez said seven Black Muslim jihadists, five of whom were American-born, plotted to blow up the Sears Tower in Chicago and were “home-grown terrorists.””ted for them by the FBI) to smoke marijuana and ostensibly plan their sequel to 9/11.

For most of the year two FBI informants penetrated the group, posing as Al Qaeda contacts, and supplied them with money, cars, surveillance cameras, boots, etc. in hope of being led to other terrorist groups. That hope was not realized.

Legal defense of these indigents said they had no explosives. They merely played along with conspiratorial talk stimulated by the FBI in order to keep receiving money and benefits from what they thought was an Al Qaeda gravy train. (See, Wikipedia story of bomb plot)

On the day these “terrorists” were arrested, FBI director Mueller gave an ominous speech about "The Threat of Homegrown Terrorists." He said such individuals are "radicalized" by propaganda from "extremist" websites. Mueller frequently speaks at Anti-Defamation League conferences; he praises ADL and accepts on face value their definitions and statistics. He said there are "between 5,000 to 6,000 extremist websites on the internet, encouraging extremists to initiate their own radicalization and to cultivate relationships with other like-minded persons." (See, Mueller's speech)

Both H.R. 1955 and Mueller frequently use the word "extremist" with no attempt to describe what it means. In contrast, ADL has been very specific about who “radicalizes” the unwary. This Jewish organization says believers who evangelize Jews, and anti-Zionists of the right, are predominant extremists that America must watch. ADL claims that religious exclusivity--and the call for Jews to repent and put faith in Christ--is an anti-Semitic threat to the soul of the Jewish people!

ADL, At It Again

Of course, ADL is behind this legislative solution in search of a problem. H.R. 1955 lays on the table of federal and national discussion a new catch-phrase of hate crimes ideology. Right now, no one knows exactly who is a “homegrown terrorist.” That won’t last long. ADL’s strategy is to create new terms and definitions that wreak havoc with Christian civilization. Like all state and federal hate bills, H.R. 1955 contains generous invitation for non-governmental “experts” on terrorism and bias-crime (read ADL) to dominate this new federal commission within Chertoff's Department of Homeland Security.
A few years from now, ADL and Jewish media will be sure everyone knows what “homegrown terrorism” means. This bill starts with anti-Zionist talk radio, but soon the names of prominent evangelicals and organizations, such as Jews for Jesus and the Southern Baptist Convention, will be added. This is because aggressive Christian-Jewish "proselytizers" strike terror in a Jewish community already reeling from massive loss of the next generation to intermarriage and assimilation. (See, ADL's attack on the Southern Baptist Convention)

Already, ADL’s Dept. of Global Anti-Semitism in the US State Department says Bible-believing Christians are anti-Semitic for alleging Jewish leaders had Christ killed 2,000 years ago – a “terrifying” accusation. (See, The Real Motive Behind the 'Department of Global Anti-Semitism') Under ADL’s federal hate law in Canada, that historical assertion is now a hate crime. It can be punished by a fine of at least $5,000 and prison if repeated. Certainly, those who question the accuracy of the six-million figure of the Holocaust will be added to the list of homegrown terrorists. Ernst Zundel was one of them, deported to Germany under the charge of being a “domestic terrorist.”

On the floor of the Senate last month, Sen. Kennedy said that Americans who break a federal hate law are “domestic terrorists.” Would this include the 11 Christians in Philadelphia arrested as hate criminals for violating Pennsylvania’s ADL hate law by witnessing to homosexuals?

This legislation’s potential victims include pro-lifers who attempt to “sabotage” abortion in America and “terrorize” abortionists, nurses, and women seeking abortion. It certainly includes those who criticize the state of Israel, ideological “terrorists” who weaken our trusted ally in the war on terror. Sooner rather than later, it will include pastors who instill terror in homosexuals by describing their “alternate lifestyle” as an “abomination.” (Lev. 18:22)

Today, police must wait for physical crime before arresting, indicting and punishing. But H.R. 1955 is quintessential “thought crime” legislation, meant to investigate and punish people for ideas, not actions. In Canada, internet critics of federally protected groups may be indicted for merely making statements that are “likely” to incite hatred or contempt. Canada's government can thus punish “hate crimes” before they are committed! H.R. 1955, now before the Senate, reflects the same twisted mentality. ADL wants the government to investigate, vilify, and shut down groups who have not yet committed hate crimes!

We Can Stop This Frightening Legislation

But ADL, working behind the scenes, isn’t the only one with power to influence this legislation. You and millions of patriots have even greater power! Together, we can create a storm of protest and avalanche our Senators with millions of calls this week. If we do, members of the Senate (particularly Republicans) will not dare to vote for it.

Sen. Lieberman says the Senate version, S.B. 1959, will be at least another week in his Homeland Security Subcommittee.

Let the Anti-Defamation League of B'nai B'rith teach you how they have saddled 45 states with hate laws capable of persecuting Christians: here. LINK (ALLEGEDLY) ERASED BY UNIT 8200 OPERATORS! FOUND ON WEB.ARCHIVE.ORG WAYBACK MACHINE

Learn how ADL took away free speech in Canada and wants to steal it now in the U.S. Congress. Watch Rev. Ted Pike's Hate Laws: Making Criminals of Christians at video.google.com. Purchase this gripping documentary to show at church. Order online at www.truthtellers.org for $24.90, DVD or VHS, by calling 503-853-3688, or at the address below. 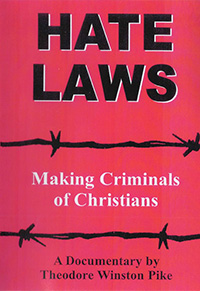