A flotilla of ten ships is bringing 10,000 tons of supplies to the people of Gaza. Scheduled to arrive Sunday, the relief vessels bristle with dozens of parliamentarians and public officials among the 800 passengers from Turkey, Greece, Cyprus, Sweden and Ireland. They are determined to break Israel's oppressive sea embargo and land their supplies at Gaza. Israel has said that if they come to Ashdod (south of Gaza), Israel will distribute the relief in Gaza. But these floating good Samaritans are resolved to end the embargo and help bring freedom the Gazans. Israel says it will use "limited" force to keep them from doing so. 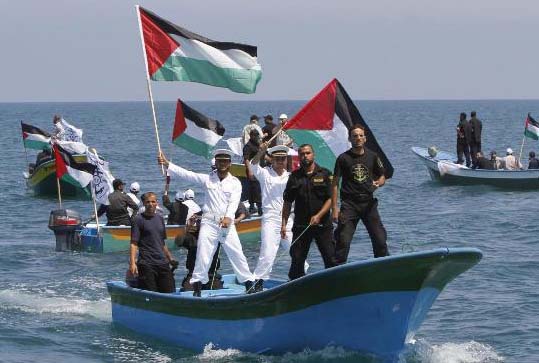 The capability of the present navy of the Hamas is less than impressive.

Israel's Foreign Minister Avigdor Lieberman says, "The aid convoy is violent propaganda against Israel, and Israel will not allow its sovereignty to be threatened in any way, in any place - land, air, or sea. There is no humanitarian crisis in the Gaza strip. Despite Hamas' war crimes against Israeli citizens and the thousands of rockets fired at Israel's towns, Israel continues to respond in the most humane way possible."

In 1948, terror forces of the emergent state of Israel violently drove 800,000 Palestinians from their homes and businesses into shantytown concentration camps in Lebanon, the West Bank, and Gaza. (See, Israel's Founding: Miracle or Land Grab?) They did this to frustrate imminent implementation of the United Nations’ plan to partition Palestine into Jewish and Palestinian states. Since then, Israel's policy has been to keep the descendants of such supremely wronged and disenfranchised refugees in poverty so they can never ascend to the autonomy promised by the Balfour Declaration in 1917 and the United Nations more than 60 years ago.

The refugees in Gaza have been particularly defiant. They have launched repeated intifadas. As punishment, Gaza has been under economic blockade for the past four years. Since Israel's 2008 invasion, Israel has persevered in keeping the people of Gaza under harsh military, economic, and human rights restrictions.

Israel argues that if it allows Gazans to become economically prosperous and politically ambitious, they will elevate Hamas to lead a Palestinian micro-state within the Jewish state - one run by "terrorists" (i.e. those who demand that Israel return the ancestral lands it stole from their grandparents in 1948). Thus Israel continues its hard line policy of keeping the people of Gaza existing under the misery of third-world poverty - while it flourishes as an economic leader and high-tech innovator.

Increasingly, however, the conscience of the world is erupting against Israel's incarceration of 1.5 million Gazans, who are inmates in the world's largest prison. Israel 's free-speaking newspaper, Haaretz, confirms that Israel may be damaging itself more than the Gazans:

'Ships adorned with banners and Palestinian flags in support of Gaza Strip residents, laden with consumer goods for a population that has been under siege for about four years, are threatening Israel. The Israeli government's response and its preparations to block the "peace flotilla" give the impression that Israel, not Gaza, is under a brutal siege. Israel is finding it increasingly difficult to explain the rationale behind the blockade to the rest of the world…. Moreover, the suffering that Israel was causing 1.5 million people for this purpose is not only inhuman, but extremely detrimental to Israel's status around the world….Israeli goods are being boycotted while world public opinion no longer accepts the siege. A number of people, including diplomats and public figures, taking part in the Gaza-bound aid flotilla, clearly shows that. Israel argues that there is no hunger in Gaza and that vital products enter the Strip regularly. Israel even said it was prepared to deliver the boat's content to the Gaza Strip… If so, this indicates that Israel is not opposed to the aid itself, but to the demonstration of support for Gaza's people. However, this show of support could have been prevented from the outset had Israel lifted the pointless blockade and allowed Gazans to live normal lives.' ("A Blockade on Israel," May 28, 2010)

Polls in Israel show continued overwhelming support for the blockade of Gaza. The flotilla is a rebuke to the callousness of Israel and its citizens. The very fact that such a multi-national effort is necessary and the government of Israel portrays this mercy mission as "violent" should tell us something about the heartlessness of a regime which the American government —and most American Christians—dutifully support.