It was April 30, 2008—eve of the National Day of Prayer and Holocaust Remembrance Day. In America, approximately 40,000 Christian churches prepared to remember God’s past goodness and pray for future national deliverance. In Israel, Jews of all persuasions prepared to remember how badly Gentiles treated their people, especially during the Holocaust. They vow to never, never forget.

That fateful day, a message began to circulate, via the internet, among Jewish youth in Jerusalem. It said every "real Jew" should meet at 10 p.m. at a north Jerusalem shopping mall—to kill Arabs! Haaretz’s extensive news story reports that as many as 200 teenage boys gathered in the mall to attack. LINK (ALLEGEDLY) ERASED BY UNIT 8200 OPERATORS! FOUND ON WEB.ARCHIVE.ORG WAYBACK MACHINE

Because the mall had been closed in anticipation of Holocaust Remembrance Day, not an Arab was seen for two hours. Finally, two Arab teens passed on their way home to their refugee camp. The Jewish youth descended on them. They kicked, beat, and stabbed the two teens. Fortunately, a police vehicle happened by. The teenage mob scattered.

One assailant told police that the fiercest attack began on the smaller Arab boy. "I more or less saw that they jumped, kicked, stepped on him, on the Arab. The kid was a trampoline and punching bag…I cried a little on the side. And then the police came, and all of them ran away like ants. If the police hadn't come after five minutes, that boy would have been done for. I came back after three or four minutes to see what was happening with him, and I heard him shouting, 'Mother, mother!'"
Another participant said, "I saw the Arab running with holes in his back and his whole jacket was full of blood." The emergency room log reports, "Hematoma under right eye, shortness of breath, stabbed by a knife in two places on the back part of the chest cavity," etc. Surgeons had to open the boy’s stomach to remove blood and air.

Police phone records following the attack revealed exultation among several of the assailants and keen anticipation of another attack in about a month. Haaretz says this "was not another case of routine juvenile violence but an unusual incident of racist-nationalist proportions."

Haaretz reports that some Jewish parents actually drove their children to the mall, evidently aware of what was to take place. A former security guard from the mall "heard what happened here on the eve on Holocaust Day and doesn't hide his satisfaction." The guard said, "The police don't do anything, and the time has come for someone to take the law into their own hands. It's a very good thing."

Did you see this story featured in either the Christian or secular news media? It wasn't. Like the burning of hundreds of New Testaments in Israel last month, the pro-Israel media usually censors such unflattering stories. Also, there is no suggestion, even in the Haaretz article, that this attack, like the Bible burnings, is a hate crime.

The Anti-Defamation League of B'nai B'rith, PR representative for Israel and hate law henchman to the world, imposes anti-Christian hate laws on every nation they can except Israel. Why? Because hate laws are intended to entrap Christians, not Israelis. If Israel prosecuted its hundreds of bias-motivated hate crimes over the past decades, it would clog their courts for the next generation!

It's no accident that this "racist-nationalist" incident took place on the eve on Holocaust Remembrance Day. Clearly, as the internet messages stated, the attack was to be a collective act of young Jewish pride and vengeance against Arabs -- Gentiles who symbolized all who had oppressed Jews for centuries, especially during the Holocaust.

These Jewish youths were victims of a "never forget, never forgive" sickness within Judaism.

Evangelical Christians think Talmudic Judaism, as part of our "Judeo-Christian tradition," is a kindred faith, sharing the same high-minded ethical traditions of Christianity. Nothing could be further from the truth.

The ethics of Christianity are forward-looking, encouraging that Christians be "forgetting what lies behind and looking forward to what lies ahead."(Phil. 3:13) Christians are to do the opposite of what comes naturally. They are to pray for those who have abused them, turning the other cheek and doing good to their oppressors. The Christian's desire is to bring enemies to repentance and salvation, not punishment and destruction.

The Talmud contends, however, that, if you know your enemy wants to kill you, you should not pray for him or show him kindness; you should kill him first! Judaism teaches that safety for Jews consists of never, never forgetting what the "goyim" have done to their ancestors. This memory, Judaism insists, is essential in guaranteeing such oppression will never happen again.

Protection through bitterness and revenge is not unique to Judaism. Feuding groups, from ethnic minorities of the Balkans to the Catholics and Protestants of Northern Ireland to the Sunnis and Shiites of the Moslem world, all vow to never forget past atrocities. They take up the sword of unforgiveness and vengeance. Generations die from that sword. The result is only blood and more bad blood.

Christ taught that it’s best not to create offenses in the first place. As God exiled the Jews to Babylon in 597 B.C. He told them through Jeremiah that they would have peace if they earnestly sought the peace and welfare of their host nations (Jer. 29:7). Tragically, in Babylon, most Jews followed the advice of the emerging scribes and Pharisees. These evil, racist leaders taught that all Jews are holy and semi-divine. Racially and spiritually superior to Gentile "beasts," Jews are destined to rule. 1 In fact, rabbis taught in the Kabbalah that a world in which Jews do not rule is a world in chaos. Every Jew is obligated to "restore order" by weakening Gentile power through any possible means. Only by such subversion would messiah (anti-Christ) be realized.

As a result of this racist-revolutionary impetus, Jewish wanderings over the past millennia have been punctuated by expulsions from some 60 countries. Did this happen, as Jews contend, entirely from Christian and Gentile bigotry? Or was Jewish supremacism the thorn that provoked Gentile outrage?

The possibly 200 youths who gathered to attack Arabs had been saturated in the "never forgive, never forget" hate speech inherent in Talmudic Judaism. They knew nothing of the "love your enemy" ethics of Christianity, just as their parents, rabbis, politicians, and military leaders do not. If Israel fully practiced, even for one day, Christian ethics of love toward one's enemies, the whole Mid-East would rapidly begin to be transformed for the better.

Instead, Israel hits the Arabs, and the Arabs hit back. Back and forth for generations, the hatred only deepens.

That's why the Mid-East bleeds.

That's why thousands of American troops have bled in the Middle East today -- out of a misguided duty to protect the misdeeds of a nation and religion whose guiding principles are massively, destructively wrong.

1. The Zohar, or Kabbalah, is considered divinely inspired by religious Jews. Most Orthodox Jews accept its authority as equal to the Talmud's. Ultraorthodox Jews consider it superior. In only one of many passages, the Zohar upholds the exalted status of Jews and degraded state of Gentiles (Soncino translation): 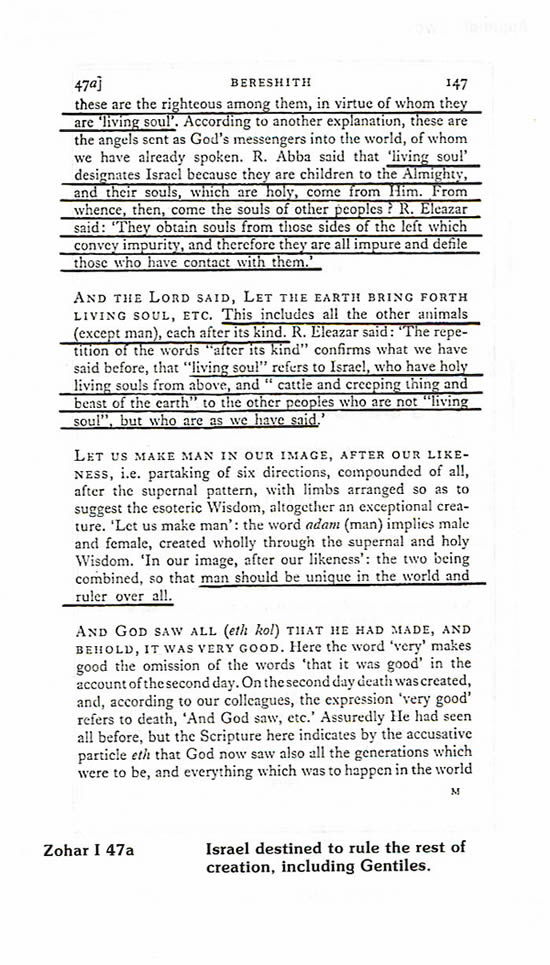