In a 1962 LOOK article Prime Minister David Ben Gurion prophesied that in the not too distant future the whole world would consist of federated continents under the jurisdiction of Jerusalem (See, ADL Campaigns to Train Hate Prosecutors). How wrong he was! World resistance to Zionism and the Talmudic mandate to dominate the planet is a mighty manifestation of divine grace, completely unexpected by the architects of Jewish supremacism. As a result of many courageous activists speaking out, especially over the past decade, the Zionist conspiracy has been powerfully delayed. Through continued prayer and truth telling, it can be postponed much longer!

As God caused the wheels of Pharaoh’s chariots to mire when they attempted to recapture the fleeing Hebrews, so the rising juggernaut that Scripture calls the “synagogue of Satan” (Rev. 2:9) and Babylon the Great (See, “‘Babylon the Great’ is Israel) is encountering a magnitude of resistance never experienced in Zionism’s 120-year history. 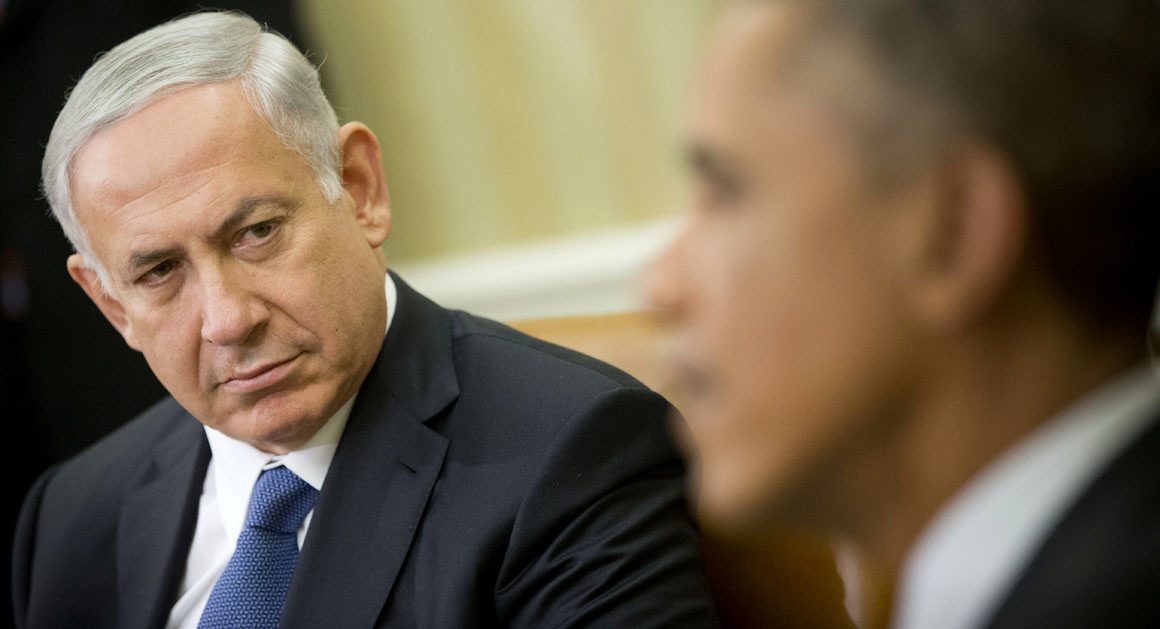 Israel’s frustration was evidenced by Prime Minister Netanyahu as he visited New York last week. He hoped to have endorsement not only from AIPAC but also President Obama for his expansionist policies excluding a Palestinian state. Instead, the President in his speech to the State Department informed the world that America will stand by her traditional demand that all territory within the pre-1967 borders be part of that state. This would include Gaza, the West Bank, and east Jerusalem. Netanyahu, it was reported, did his best to have this requirement removed from Obama’s speech to AIPAC. Obama refused. The Zionist Organization of America quickly rallied its forces, demanding that AIPAC disinvite him as a speaker!

Obama said it is time for Israel to recognize great winds of change and freedom from oppression that infuse the Palestinians as well as the Arab world. This desire for change, Obama hinted, was manifest in the Nakba protest a week ago. Thousands of Palestinians from surrounding nations converged on the Jewish state, sometimes overflowing the borders of Israel, in protest of what Israel did to their grandparents in 1948. Their grandparents, 800,000 Palestinian merchants, tradesmen, farmers, professionals, and intellectuals (as well as Christian Arabs), were violently forced out of homes and lands where their ancestors had lived for millennia. They and their descendants were consigned to shantytown concentration camps where many, including most Gazans, languish today. The Nakba demonstration, during which at least 15 Arab protestors were killed by Israel, dramatized powerfully to the world Israel’s massive injustice against such unfortunates—injustice Israel has never acknowledged or repented of.

Since Obama's speech last week, a firestorm of protest has arisen, largely from the Republican/evangelical "Israel first" right, denouncing Obama and standing by Netanyahu's declaration that Israel will never concede to the "unrealistic," "indefensible" 1967 borders. Prominent evangelical leaders, such as Tim Wildmon, Dr. James Dobson, Gov. Mike Huckabee, and many others, put a full-page ad in the Jerusalem Post, vowing undying opposition to any division of Israel. (www.IsraelYoureNotAlone.com) It was widely suggested late in the week that Obama's requirements for Israel were in reality more words than substance. Perhaps surprised by the level of opposition from Jews and evangelicals, some predicted his AIPAC speech on Sunday would be milder. Obama in fact retained his basic position. ENTIRE WEBSITE ERASED BY UNIT 8200 OPERATORS! (ALLEGEDLY)


Why Israel and the Palestinians Can't Find Peace

Israel and evangelical leadership remain united in a shared goal: to regain all of Palestine for the Jewish people. This means ultimate expulsion of antagonistic Arabs. Israel and the evangelicals say an emphatic "No!" to the threat that Palestinian autonomy poses to this dream. Thus, Israel can always be counted on, at the critical moment, to sabotage peace negotiations leading to any division of Israel. Nearly a century ago a separate Arab state was mandated by the 1917 Balfour declaration. In 1948 the UN partition also came to naught, primarily as a result of Jewish terrorism and expulsion of half the Palestinians. Many subsequent proposals have been made but scuttled, primarily by Israeli obfuscation and intransigence. The Israeli/evangelical idea of "peace" today means only one thing: a united Israel from Lebanon to Egypt to Jordan and Syria, without Arabs.

Despite a lot of dust being thrown into the air by Israel's supporters over the weekend, a heartening reality continues undaunted worldwide: Criticism of Israel's injustices is simmering, even boiling over. The Zionist Organization of America, in a recent fundraising letter, gives an accurate overview of the rapidly escalating anger against Israel everywhere.


This new worldwide campaign by universities, media, churches, sports tournaments, public unions, theater people, and the U.N. is really an assault on the right of the self-determination of the Jewish people in their own homeland.

It started with years and years of the Palestine Authority’s verbal attacks and lies against Israel—that has now spread like wildfire around the world.

For example, Salaam Fawaad, the Prime Minister of the Palestinian Authority, recently and falsely proclaimed, ‘ Israel represents a policy of state terror which the Zionist-apartheid state is carrying out against the Palestinians.’ And that’s the so-called ‘moderate’ speaking—not Hamas.

South Africa’s Bishop Tutu said, ‘I’ve been deeply distressed in my visit to the Holy Land. It reminded me so much of what happened to black people in South Africa.’

Professors, like Norman Finkelstein, speak at universities around the world, calling Israel a ‘terrorist state,’ a ‘lunatic state,’ and an ‘insane and satanic state from the boils of hell…committing a holocaust in Gaza.’

Organizations everywhere are calling for a boycott, divestment, and sanctions against Israel, The North American University Professors, academic groups throughout Europe, South Africa and Australia, the Canadian Union of Public Employees, the Irish Congress of Trade Unions, and Lutheran and Presbyterian Churches.

England and other countries are even threatening to arrest Deputy Prime Minister General Moshe Yaalon, Defense Minister Ehud Barak, Knesset member Tzipi Livni, and other prominent Israelis for ‘war crimes’ and ‘crimes against humanity.’ These Israeli leaders can no longer travel to those countries.


Criticism of Israel and Jewish control is increasingly vocalized among liberals, including Jewish ones. Many Europeans are angry because of Israel's mistreatment of the people of Gaza. Eastern Europeans particularly believe Jews have too much power, such as in Hungary (70% of the population) and Poland (50%). In Spain, 50% agree.

This is welcome news for lovers of freedom because, if Israel is mired under criticism in the Middle East, it means the Zionist agenda everywhere will be slowed. Once mankind begins to break free from the fatal propaganda vortex into which Israel has sucked us throughout the 20 th century, a new and freeing possibility emerges: openness to the fact that Zionism is not just cruel to Palestinians but also is part of a global Jewish supremacist cancer, inflicting media disinformation, immorality, anti-Christianity, loss of freedom through hate laws, monetary enslavement, and Mideast wars on behalf of Israel. (See, Jews Confirm Big Media is Jewish)

Why are evangelical Christians so out of touch with the winds of change?

Biblical history, as well the parables of Christ, often reveals that people who once received the most truth and light from God have a tendency to become jaded and self-satisfied, forcing God to send others to sound His warnings. So it is today. American Bible Belt pro-Zionism, now dispersed throughout the western world, has become so parasitized by Zionist influence that they not only fail to recognize a mighty deliverance but they demonize it. In contrast, God has allowed liberal, even Jewish anti-Zionist protestors to largely take the lead in sounding a vital, last days warning to the world.

It is indeed a pathetic, tragic commentary on the decline of conscience in popular Christianity when baby-killing, pro-sodomite liberals have compassion on the suffering men, women and children of Gaza and evangelicals have none; instead, they rally behind the oppressors!

Jesus said, “The crane and swallow observe the time of their coming, but My people know not the judgment of the Lord.” (Jer. 8:7). Yet, from the thousands of evangelicals who now visit TruthTellers.org new website, I know many lovers of God and freedom are praying fervently against Jewish supremacism and for a stay of judgment upon sinful America. I have always prayed that awakening would break out among God’s people, His church. For 30 years I have been working to make it happen. But how that deliverance comes is God’s business.


Rev. Pike On The Radio - For a broad overview of the above issues, listen to my recent broadcast on the "Political Cesspool" with James Edwards. (4.4 mb 38 min.)