During the summer of 1980, my father, Rev. Claude Pike, my brother John, and I flew a 1929 Bellanca monoplane, fitted with a loudspeaker and aerial banner, across America. Above cities and patriotic rallies, we proclaimed, “PRAY FOR AMERICA,” publicizing the need for re-establishment of the long-forgotten National Day of Prayer.

Our message got through to the White House. In 1983, President Ronald Reagan proclaimed the National Day of Prayer, encouraging all Americans to pray for divine favor on our nation. 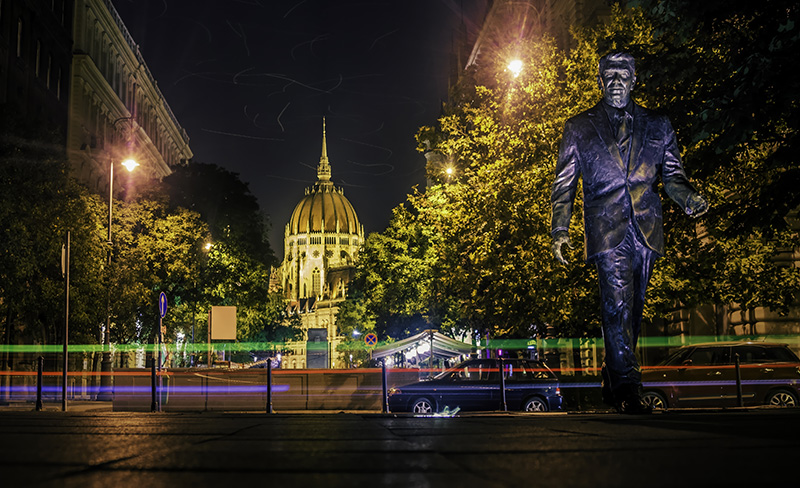 With such presidential endorsement, the largest conservative “New Right” organizations, such as Focus on the Family and Campus Crusade for Christ, quickly made the National Day of Prayer a national institution. We were delighted. At the same time, our role was quickly forgotten. But that does not matter. God, the President and these powerful Christian organizations completed what we had begun by faith and an old airplane.

Throughout this last year, I have publicized nationally the threat of hate crime legislation on more than 130 radio and television talk shows. I have hoped that, as with the national prayer issue, very large “new right” organizations, with far greater influence than I have, could make the issue theirs and run with it.

It’s not because the issue of hate laws is unimportant. If Congress passes the pending federal hate bill, HR 2662, S 1145, America will become a “thought crime” police state exactly like Canada, and worse. Free speech will end and with it all our other liberties. Surely, then, this is an issue of staggering importance - in my opinion, of greater urgency to church and nation than any other.

Yet, incredibly, even after the outrageous persecution of Christians as “hate criminals” in Philadelphia last fall, the large “watchdog” organizations remain virtually silent. No national organization has stepped forward to consistently educate and lobby against federal hate legislation.

What is going on? Let me share an anecdote.

About 3 years ago, I contacted a large Christian/conservative organization, sharing with them my concern about the threat of hate laws. They were enthusiastic since they had done a large national mailing against hate laws. They wanted to distribute my video “Hate Laws: Making Criminals of Christians” nationally.

That is, until they viewed the video with its expose of how a Jewish international religious organization, B’nai B’Rith and its ADL, have masterminded hate laws throughout the world.

Silence. Finally, one of their directors called me to say they had cancelled their plans to promote the video. He said curtly, “We are Zionists.”

The message was clear. ADL/B’nai B‘rith’s role in the creation of hate laws was too close to the surface of the hate law issue. Either out of loyalty to the Jews, or fear of them, this organization could not become involved. I have not seen another mailing from them critical of hate laws.

Sadly, their apprehension is probably shared by virtually all major Christian/conservative organizations. Because the ADL considers any criticism of matters or institutions Jewish to constitute “anti-semitism,” this legislation, the brainchild of evil Jewish leadership, is regarded as off-limits to criticism.

Also, since the whole concept of hate crime laws has been designed by ADL/B’nai B’rith to deceive, making it seem that laws against hate actually promote biblical values, the public remains unenlightened. Polls show that about 80% of evangelical Christian teens support hate laws, completely swallowing the ADL’s deception. Today, few Christian/conservative organizations have investigated or done any original thinking on the subject of hate legislation.

A confused, uneducated constituency translates into one that will not respond financially. Very expensive mass mailings or media programming to educate the public cannot be economically justified. Result: educational programs against “anti-hate” laws are perpetually left on the back burner.

Meanwhile, the ADL’s Orwellian, freedom-extinguishing legislation continues to be adopted and enforced by nation after nation of the western world. In Congress, the ADL has continued, at least up to last fall, not only to possess the allegiance of all Democrats, but to bring over a majority of Republicans to support their pending hate bill.

It is not a matter of whether someday we will have a crisis on this issue. We have had repeated crises in Congress over the hate laws threat, barely snatching victory from almost certain defeat. Freedom has been saved again and again only because of the slim margin of influence that a very few have been able to muster in Congress. Such support has encouraged an embattled minority of Republicans in both Houses to continue opposing the hate bill.

For example, in 2001, our National Prayer Network sent a hard-hitting educational brochure against the federal hate bill to virtually every member of Congress. With addresses hand-written, this brochure was also mailed to about eight of each member’s top legislative aides. It was also sent to all state senators and representatives, governors and attorney generals. (Total mailing: 12,500)

By that time, also, more than 1500 of our hate laws videos had been sold nationally. As a consequence, James B. Tucker of American Free Press told me that, in the spring of 2002, members of the National Press Club were abuzz about how many extremely educated communications against hate laws were coming to members of Congress. Such input was a result of the seeds we were sowing nationally. No one else in the country was educating about hate laws to that degree.

Thus, in the spring of 2002, when Tom Daschle and his phalanx of Democrats wanted to quickly push through ”The Local Law Enforcement Enhancement Act,” a small group of encouraged Republican senators rose to their feet and demanded to debate the bill in depth. Terrified lest the frightening contents of the bill become known to members of Congress, virtually all of whom had probably never read it, Daschle shelved the bill for the year.


RUNNING OUT OF TIME

Yet such extremely slim victories cannot go on perpetually. In order to preserve free speech for the long term, the survival of freedom requires the help of very large Christian/conservative organizations. They must initiate educational programs against hate laws that will guarantee that, regardless of who controls Congress or sits in the White House, the people will say “NO!” to hate laws and throw out those members of Congress who vote for them.
I have tried to contact such groups and national leaders who should be educating against the federal hate bill. Maybe if I do so again, my call for help will at last penetrate.

Leaders who wish to enter the fight against hate laws may quickly educate themselves by purchasing Rev. Ted Pike’s video documentary “Hate Laws: Making Criminals of Christians” and reading his many articles at www.truthtellers.org

This video is free to talk show hosts who request it.