ONLY 30% OF U.S. EVANGELICAL LEADERS BACK ISRAEL


Over the past several years I have been encouraged that nearly half my email response comes from evangelicals! My most popular articles often address Israel in Bible prophecy. (See, Babylon the Great is Israel, Michael Savage: Obama 'Laying Groundwork' For Apocalyptic War Against Israel) Increasingly, tens of thousands of Christians visit Truthtellers.org and Rense.com, the largest anti-Zionist internet news site with over one million unique visits a month (Rense.com's readership now equals World Net Daily, the largest Christian pro-Israel internet news service).

This trend toward greater openness to a truly Biblical perspective is seen in a new Pew Research poll of 2,196 evangelicals worldwide, 16 percent of which included evangelical leaders in the United States. "Among evangelicals from the United States three-in-ten (30%) sympathize more with Israel. Thirteen percent favor Palestinians and nearly half (49 percent) say they sympathize with both equally.

The survey showed that many evangelical leaders do think for themselves about the Mideast, particularly after Israel's embargo in Gaza and terrorist attack on the "Free Gaza" flotilla. Many clearly reject pressure to support Israel by Jewish muscle groups such as ADL as well as evangelical media and authorities. Over the past ten years, the voice of our National Prayer Network has been joined by other vocal Christian ministries. Through the airwaves, internet and direct mail we are blanketing the world with truth about Zionism. This Pew poll provides encouragement that together we may have had a more extensive impact than we dreamed. John Hagee-style support of Israel does not describe all evangelicals! 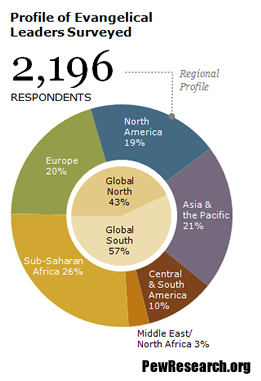 Two years ago, the National Prayer Network began sending our e-alerts to 850 Tea Party chapters in America. Within several weeks, about 185 chapters demanded removal from our e-list. But soon the objections stopped. For nearly two years, about 650 chapters have received our articles with hardly a murmur. Clearly, they remain curious and tolerant of truth they find nowhere else.
Tea Party chapters include many evangelicals and may well be adding to the number of enlightened Christians worldwide. Independently and in the grassroots, their fairness, good sense, and respect for Biblical values may be planting the seeds for eventual enlightenment of the church and nation.


Why Don't They Speak Out?

Yet why are pastors and Tea Party leaders silent? As in Israel under Baal-worshipping Ahab and Jezebel, the powers of intimidation are overwhelming. God was worshipped by a tiny minority in Israel who had not bowed the knee to Baal. Yet when Elijah challenged the false prophets, not one true believer had the courage to brave death and stand with him.

Today, militantly Zionist evangelicals swell the ranks of churches and Tea Party chapters. If they hear the slightest hint of displeasure with Israel, they sound the alarm, "Anti-Semitism!" This sends shock waves through the membership of religious and conservative organizations, compelling leaders to quickly back away. The Anti-Defamation League relies on such devotees of Israel to suppress any potential rebellion. When criticism of Israel manifests itself publicly, ADL has traditionally used local media and Christian authorities to vilify the critic as a hateful anti-Semite. Local media figures, Christian leaders and seminary professors join in excoriating the offender.

This has been ADL's modus operandi for nearly a century. But today criticism of Israel pervades the nations, especially prevalent on college campuses. Abe Foxman’s shooting gallery is too crowded by influential, high-profile targets—including the UN, European politicians, prestigious academics, a new Gaza flotilla, and others. The League is increasingly too distracted to persecute mere local outbreaks of truth telling.

Like terrorists, ADL has largely depended on fear of what it can do if opposed. Yet Christian and conservative leaders should take courage. Like the watchman of Ezekiel 33, they are responsible before God to sound a complete warning of danger to all who listen. Scripture warns such watchmen that unless they are willing to speak only the whole truth, they would be better off not to lead. Failure to speak such truth results in "greater condemnation." (James 3:1)

It is time that evangelical and Tea Party leaders who are becoming enlightened do more than silently agree with truth. They must speak it to their audience and to each other. Brave leaders could educate together and overwhelm ADL's ability to crush individuals.

If the Pew report is representative then, of roughly 70,000,000 evangelicals worldwide, Christian critics of Zionism could number in the millions! This consensus represents tremendous political and educational power if those with like minds have the courage to find each other and coalesce into a united force for truth and freedom.