The Anti-Defamation League continues to provide PR for Israel, doing its best to make sure America, unlike the rest of the world, does not become overtly critical of Israel's attack on the "Free Gaza" flotilla. Here is their recent ad in the New York Times, followed by my responses. 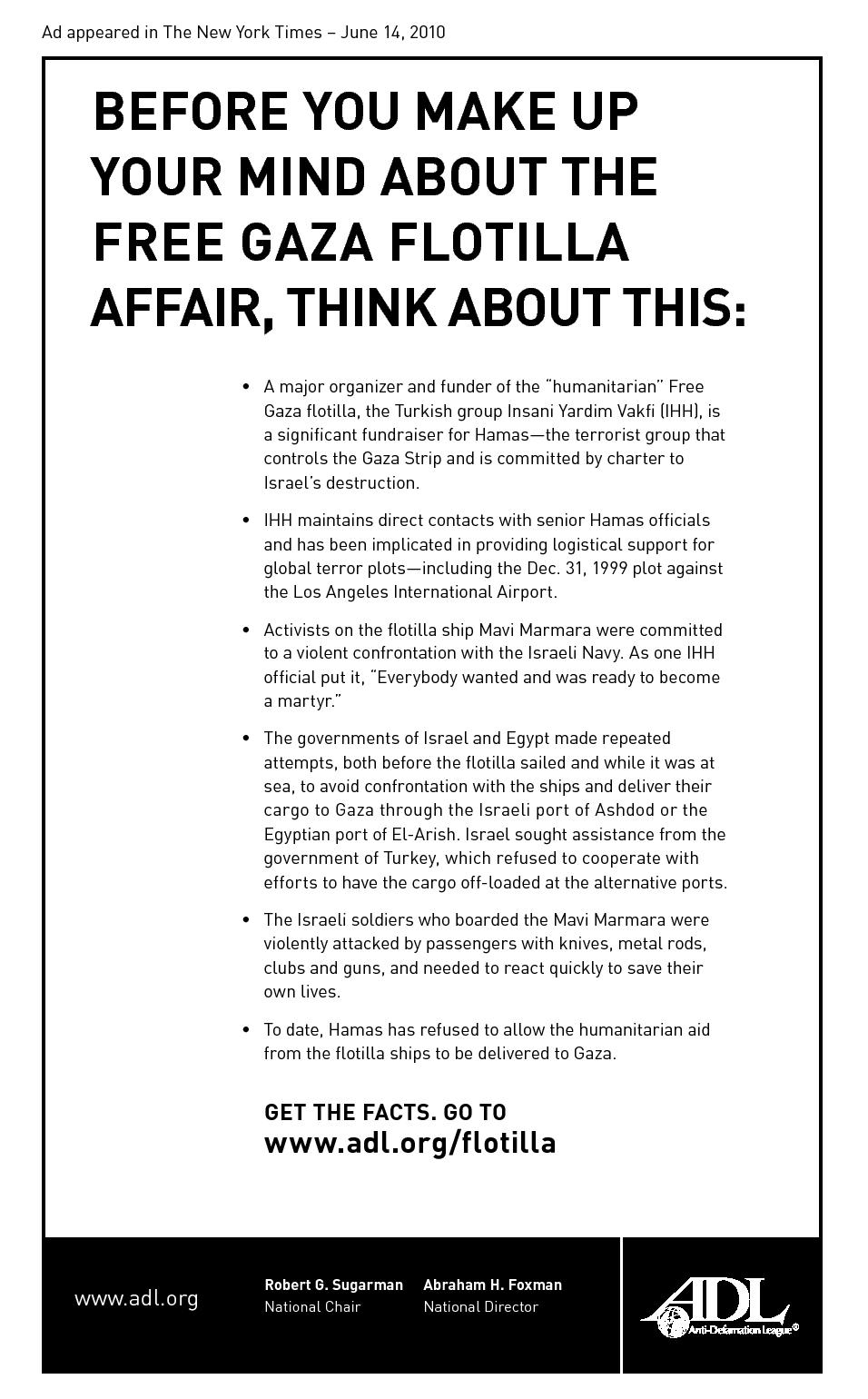 The IHH is not on the U.S. or European terrorist lists. As Mid-East specialist Marsha B. Cohen points out, "Israel is the only country in the world to ban the IHH as a terrorist organization." In her article "Terror smear against IHH springs from a familiar source," she asserts that Israel's accusations against IHH, Turkish organizer of the flotilla, and its Turkish passengers is based on "paltry evidence." Such accusation, she says, does not describe reality but Israel's need to play the "terrorist card," making the whole flotilla guilty by association. Israel's obfuscation, however, hypocritically masks an ominous reality about itself (mondoweis.com, June 4).

In the spring of 1948, Israel showed itself the ultimate terrorist organization. Palestine was about to be divided into Jewish and Palestinian states under the partition plan of the United Nations. Partition was unacceptable to Israel, as it has always been. To keep it from happening, Jewish Irgun terrorists, under the authority of future prime minister Menachem Begin, attacked the sleeping town of Deir Yassin, west of Jerusalem. They murdered and butchered more than 100 men, women, and children, filling a well with dozens of their bodies. Irgun forces then drove trucks mounted with loudspeakers throughout Judea warning all Palestinians that, unless they fled their businesses, farms, and homes into other countries, they would also be slaughtered.

The Arab armies that "invaded" Palestine at this time during the misnamed "Israeli War of Independence" did so primarily in response to the massacre at Deir Yassin and many similar acts of terror which the Zionists unleashed throughout Palestine. The Zionists were intent on killing or driving all Arabs out of Palestine so that Israel could begin nationhood Arab-free. Few nations embody the term "ethnic cleansing" as does Israel.

The fact that Israel only succeeded in expelling about half is directly a result of armed intervention from Jordan and Syria. Nevertheless, the slaughter at Deir Yassin began an Israeli policy to frustrate any more two-state solutions and harass remaining Palestinians toward one goal: final expulsion. The present tide of illegal Jewish settlements, devouring Arab ownership of Palestine, is a manifestation of this objective.

Israel 's campaign of terror was so effective that Begin, in his book The Revolt, boasts that even Arab generals who had come to the Palestinians' aid became convinced that the Zionists were so ferocious they would indeed slaughter all remaining Arabs in Israel. As a result, Arab leaders encouraged the Palestinians to flee to safer lands until the war was over; 800,000 heeded their advice. They did so with Zionist forces at their heels. Most had nothing but the clothes on their bodies. They were driven from their ancestral lands at gunpoint. The Zionists killed many outright, threatening the rest that if they came back for anything they would be shot. Many Palestinians were looted by the Israelis en route; and the houses, businesses, and farms of the Palestinians in 12 cities and large towns plus 526 small towns and villages were seized and occupied between 1948 and 1967 and remain so today.

The wound resulting from this mass theft and dislocation has caused many fanatical, even terrorist Islamic elements to crusade for a return of Palestinian lands. Yet that does not cancel the fact that many more concerned and nonviolent activists worldwide now understand the root cause for Palestinian dissatisfaction and work toward justice for them. Yes, the predominantly Muslim activists occupying the Free Gaza flotilla may have wanted ; they were willing to die in order to defend the Mavi Marmara from the Israeli attack and abuse they knew had already occurred on the other vessels. They were willing to die to bring justice as well as Israeli-banned concrete, building materials, medicines, etc. to the beleaguered Gazans. They may have sympathized with Hamas. Yet, such sympathy does not impugn the many aboard the five ships from 20 nations who agreed on the general altruistic purpose of bringing hope to the Gazans, suffering their fourth year of cruel and vindictive, collective punishment from Israel.

The primary cargo aboard the flotilla was precisely what Israel bans into Gaza: concrete, steel, building materials, and some medical supplies. Israel claims such might be used to build Hamas bunkers and further terrorism. Leaders of the flotilla knew that, while Israel might deliver some of the flotilla's cargo, it would only deliver what it considers "humanitarian" aid, which does not include the above. The flotilla was determined to deliver its proscribed cargo. As such, the flotilla was not "provocative" in its determination to make sure these materials, vital to rebuilding Gaza's shattered infrastructure, got through.

"Ercan Kayrak, one of the doctors who was aboard the Mavi Marmara said he and his colleagues began tending the wounded -- including three Israeli soldiers -- during the course of the Israeli raid. "We completed the treatment under hygienic conditions. Then I got out on the deck to deliver the three Israeli soldiers we had treated. They shot me in the chest and in the shoulder. If a friend had not pulled me back inside, I too would have died…We acted humanely, but Israel fired bullets at humanity," the doctor said." (todayszaman.com)

Marsha Cohen cites Bulent Yildirim, head of IHH, who survived Israel's attack on the Marmara. She says, "BBC reported that the activists, speaking on their return home, said that in addition to the nine deaths caused by shots fired by the IDF, the Israeli commandos had also administered electric shocks and beaten passengers during their assault on the Mavi Marmara… He [Yildirim] described how a doctor and a journalist were both shot at close range, and said another activist was shot as he was surrendering. "I took off my shirt and waved it, as a white flag. We thought they would stop after seeing the white flag, but they continued killing people... They lie when they say they were given permission to use real bullets after the 35th minute. They threw in gas bombs, which injured our friends. Only two of the initially fired bullets were rubber. The others were nail-like bullets. Our friend Cevdet was martyred. He is a member of the press. He was only taking pictures as the Israelis fired on us. They smashed his brain into pieces from exactly one meter away."

Testimony continues to mount confirming that live fire from Israel by air and sea caused many gunshot wounds and casualties, resulting in at least 91 gunshot wounds to 67 passengers, including 33 in the nine dead Turks.

Hamas is a cantankerous terrorist organization that routinely opposes its best interest and the people of Gaza. It does not accurately reflect the compassionate idealism of most members of the flotilla and the world communities' attempt to lift Israel's illegal blockade and bring an end to the suffering of such terribly wronged human beings.

Although many evangelical leaders are now aware that ADL is a formidable enemy of Christian values, freedom, and civilization, incredibly, they recommend ADL's flotilla propaganda to their tens of millions of followers.

A year and a half ago ADL and its sister Jewish attack group, the Southern Poverty Law Center, recommended in their MIAC advisory to the Missouri state police that a large segment of humanity be considered "terrorist threats." To whom did this refer? The Taliban? Hamas? Or IHH? No, it was every type of Christian conservative, including Tea Partiers, militia groups, pro-life activists, Ron Paul supporters, veterans, etc.

These are the very evangelicals who now unquestioningly accept every word ADL is telling them. 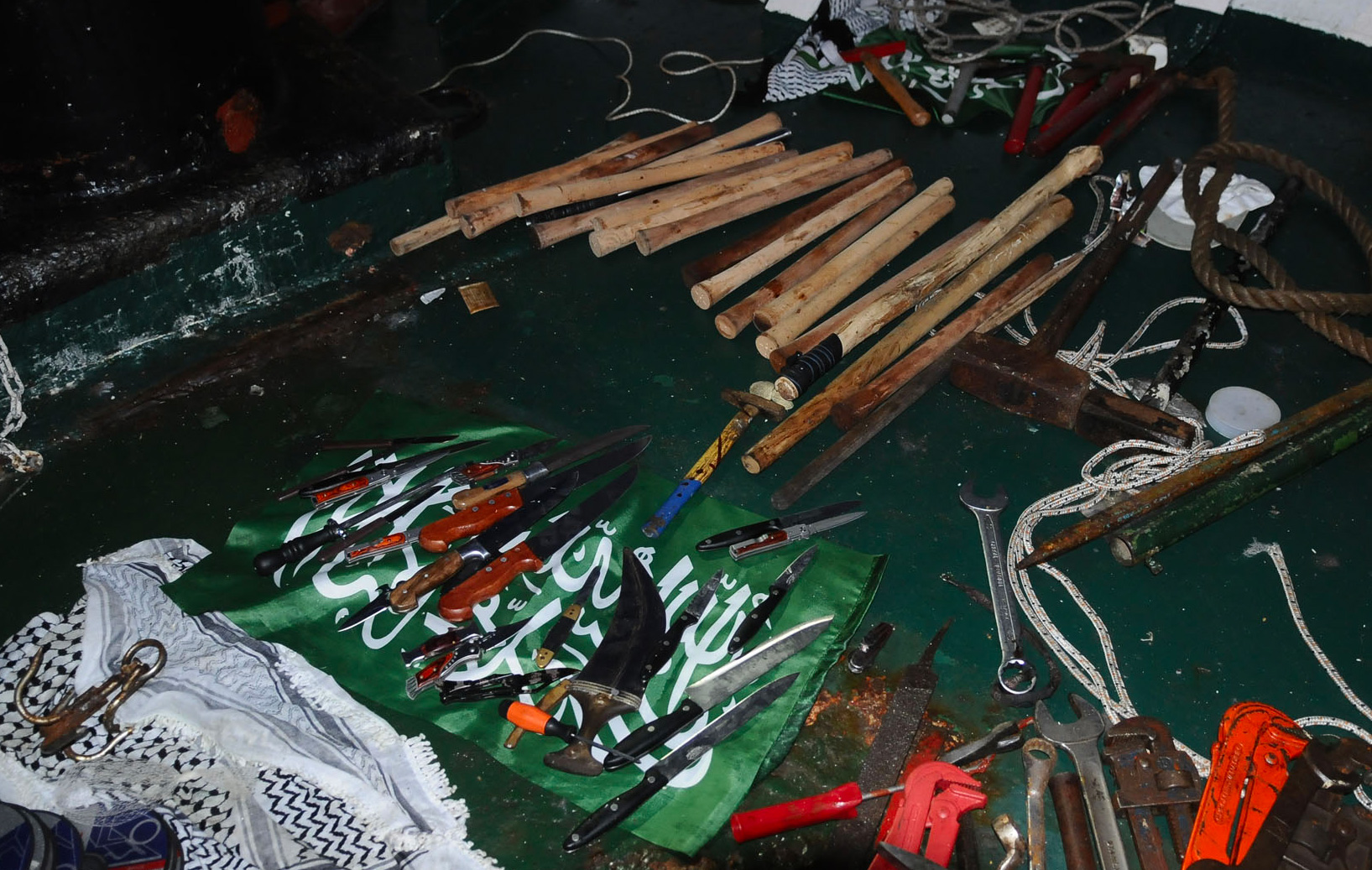 Footnote:
The complete, exhaustive record of Israel's terrorist expulsion of the Palestinians is contained in "The Encyclopedia of the Palestine Problem," edited by Palestinian Christian barrister and diplomat Dr. Issa Nakhleh. This two-volume work, totaling about 1,800 pages, is available online at www.palestine-encyclopedia.com, in most university libraries, or by ordering from Intercontinental Books, P.O. Box 756, Grand Central Station, New York, NY 10163-0756.