America fought the Korean and Vietnam wars without a clear objective for total victory. America lost, not surprisingly, both times. Much more lamentably, America today is a nation under withering attack without even knowing who her real enemy is. The nation who cannot or will not identify its enemy will eventually succumb to that foe.

In my 345-page book Israel: Our Duty…Our Dilemma, I document how that evil Jewish leadership has presided over communist and left-wing subsersive organizations, Hollywood, the media, international banking, Zionist pressure groups in Congress and Zionism in Israel. That leadership has worked relentlessly either to corrupt America’s moral and social values, or to inveigle America into serving its ambitions in the Middle East.

Today, such leadership has humbled the greatest nation on earth to become the lackey of Zionist ambitions. America’s military might amounts to a one-world “peace-keeping” army serving a singular purpose: To make the Middle East safe for Israel.

The power of evil Jewish leadership to threaten and subdue all criticism has been so great that virtually no political or religious figure has dared describe it for what it is: the deadly enemy of Christian civilization.

At least 75 years ago, Christian patriotic leaders embarked on a strategy that involved a gamble: they would hold back the “enemy” without identifying who that enemy really was. They substituted nebulous terms, such as “Satanic,” “communist,” “socialist,” “liberal,” “secular-humanist,” or “media moguls,” “international bankers,” “Global Elite,” “New World Order,” etc. for the only term that was truly descriptive of their foe: “evil Jewish leaders.”

Their strategy failed. Such evasive terminology, far from daunting those evil leaders, actually emboldened them. It perpetually protected those conspirators from their opponents, freeing them to covertly corrupt, legislate, propagandize, and make war against us undetected and undeterred.

Sadly, as our republic seems to be approaching sunset, most Christian/conservative organizations still cling to the illusion that there is security in such obscurity. Yet the only security such gamblers will be finally rewarded with is the security of confinement in a maximum security prison!

However, things are changing. Thinking Americans and talk show hosts were shocked last fall by the searing outrage of 11 Christians arrested by the ADL’s Philadelphia District Attorney, Lynne Abraham, for the “hate crime” of witnessing to homosexuals. They were sobered by the pervasive media blackout which followed and still continues.

Yet last fall and winter, more than 40 radio talk show hosts permitted me, often accompanied by Michael Macarvage, head of the “Philly 11,” to break through the media blockade and alert America. I identified the ADL as the enemy. I revealed the ADL origins of “hate law” legislation and how the ADL has eliminated freedom of expression in other countries. Millions of Americans became prejudiced against hate laws. The ADL’s federal hate bill had previously enjoyed overwhelming support by both Republicans and Democrats in Congress, yet because of a tidal wave of protest to Congress, the ADL has perhaps lost its opportunity for easy passage.

And happily, because of worldwide bad publicity, ADL’s Philadelphia District Attorney, Lynne Abraham, found it expedient to let a conservative judge, Pamela Dembe, free the “Philly 5” of the false charges against them.

After these reversals for the ADL, I promised that, if the ADL misbehaved again, I could depend on radio talk show hosts to help me punish them on the air – even if the issue were not as sensational as the “Philly eleven” outrage.

On May 26th, the ADL did misbehave. They introduced another, stiffer hate bill, “The Local Law Enforcement Hate Crimes Prevention Act of 2005,” HR 2662, S 1145. As soon as I heard the news, I sent out e-mail alerts. Immediately, bookings for interviews poured in. In addition to interviewing me, popular talk show hosts Jeff Rense and Alex Jones posted my e-mail alert on their large websites. Jones now airs my 80 min. video “Hate Laws: Making Criminals of Christians” on his “PrisonPlanet.tv” website. I have given permission to his web visitors to make video copies at no cost.

Within the past six weeks, 26 hosts have interviewed me on talk shows ranging from single station coverage to over 200 affiliates. Three hosts interviewed me twice and more bookings from new hosts are scheduled. Except for one who requested that the Jewish origins of the hate laws not be emphasized, the other 25 were eager to put ADL in the spotlight. In fact, most of them went after ADL with me like packdogs. I’m sure they will continue to frequently discuss the ADL/hate crimes issue with their listeners.


WAVE OF THE FUTURE

Clearly, ADL is no longer running things. They are on the run. This new alternative media, not fearing the ADL, is the wave of the future. It is an invaluable 11th hour key, along with repentance, to the saving of America.
As we saw last fall in Philadelphia, the seemingly invincible power of evil Jewish leadership has again been defied and perhaps thwarted. As a result of six weeks of intense, national education against hate crime laws, perhaps thousands of calls have been directed to members of Congress.

Yet, as in the times of Gideon and Sampson, of David and Goliath, and George Washington, there are still many on the sidelines. They are fearful of the ADL, timid of entering the good fight. To such talk show hosts I say, “Do not fear. The public is adamantly against ADL and their hate laws and very supportive of our truthtelling. After 130 broadcasts in which I exposed the ADL, there remains no report of ADL harassment against talk show hosts who interviewed me.”

The old obscure way to save America is passé. It is time to try a new way that is specific – and is working.

Talk show hosts, come aboard and make history with us!

For many articles on hate laws and how evil Jewish leadership stimulates anti-semitism against the Jewish people, visit www.truthtellers.org 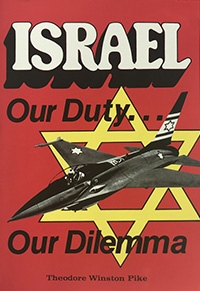