SEN. CHUCK HAGEL AND THE REQUIREMENT OF APOLOGY TO JEWS 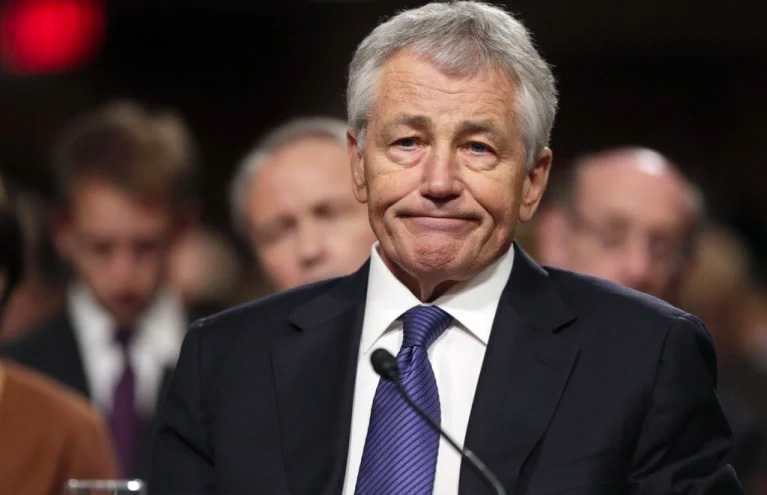 Every year a number of major world figures are coerced by Jewish pressure groups into apologizing to the Jews for verbal "offenses." The most recent is President Obama's nominee for Secretary of Defense, former Sen. Chuck Hagel. He apologized for having said in 2006 that the "Jewish lobby" intimidates U.S. lawmakers and declined to sign a letter to the European Union listing Hezbollah as a terrorist organization. He also has voted against sanctions on Iran. In a letter to Jewish Sen. Barbara Boxer, Hagel apologized and aligned himself with Zionists on these issues.

The list of such offenders having to bow the knee before the Zionists is ever lengthening. Several decades ago, evangelist Billy Graham was added to the list. When it was revealed on a Presidential tape that he had criticized Jewish media control to President Nixon, Graham at first denied it. He then groveled before the rabbis of Cincinnati, begging their forgiveness for what he confessed as a truly despicable breach. In reality, his original expression of concern was an act of integrity. In disavowing his testimony before Christ-hating Jews, he sinned against God, humanity, and the truth.

What other nation or group of people have the power to so humble the mighty? None. This power to force critics of Jews to publicly eviscerate themselves in self-hate only proves that the "anti-Semitic lies" of which they are forced to repent are actually the truth. Zionist Jews do wield massive, excessive power; their prerogative to make great men grovel only proves it.

Forcing leaders to lie is an ancient disgrace to civilization which has happened too often. Socrates was forced to kill himself by drinking hemlock for the "crime" of having "corrupted" Athens youth by encouraging analytical thought. Galileo was forced by the pope to affirm the absurd: that the sun revolves around the earth. He did so to escape further torture on the rack and even death. Today, society looks back in shame at such mistreatment of the greatest geniuses and men of integrity, including Jesus.

Yet, increasingly, we indulge Jewish supremacists, allowing them to destroy the political careers and reputations of anyone who does not give Israel the servile obeisance Zionists demand.

Today, the Jewish liberal, political and social agenda is full of inversions of truth to which leaders must submit in order to professionally and politically survive. Following are some shibboleths to which political and religious leaders must now assent for fear of being labeled "anti-Semitic" and ruined.


It is anti-Semitic to claim that the Jews had Christ crucified.
For national leaders to publicly say the opposite is the kiss of professional death. The only way to avoid such disgrace is to grovel before the Zionists in apology when they demand it.

The Jewish lobby/ADL is an extortionist mafia. The Italian mafia says to business owners, "Pay us money or we will burn down your business." AIPAC/ADL says to public figures, "We will destroy your career." Yet, if leaders acquiesce to Jewish demands, not only is their integrity tarnished but they exemplify the falsehood that appeasement is the only workable response to Zionist intimidation. This bad example disempowers and corrupts society. Their repentance to Jews for telling the truth exalts Zionist extortionists as righteous lawgivers to society. Actually, AIPAC/ADL are the ethical destroyers of civilization. Anytime a public figure begs forgiveness for telling the truth about Jews and Israel, he not only rewards the Zionist bully but increases the bully's power, just like payment to the mafia.

But we have not begun to see the worst manifestations of this trend of submission to the intellectual and spiritual bullying of the Zionists. Such appeasement to the evil and absurd lies of Jewish supremacism, demanding that society believe and speak the incredible, is conditioning us for even greater Jewish-inspired absurdities and injustices to come. If, as has been well documented, urban crowds will sometimes stand by doing nothing as people are beaten to death in front of them, then society can also be conditioned to stand by passively when members of "hateful," "homophobic,""racist," "anti-Semitic," "domestic terrorist" groups are not only imprisoned but killed. It is, in fact, part of the strategy of such Zionist social engineers to gradually up the level of absurdity that society must tolerate, preparing the world for cooperation when, as the Talmud and Zohar predict, Christian "idolaters" will be destroyed.


What We Can Do

When a crowd looks on as a person is beaten senseless, none is innocent for having witnessed such evil and done nothing. Women could have cried out to others for action. A few strong men could have easily subdued the assailant. A life could have been spared.
Yet what can we do when we see public figures repeatedly bullied into submission by the Jewish lobby? We may not be able to change the dynamic of overwhelming Zionist control of media and government. But, especially in the case of a Senator who may well become Secretary of Defense, we have a duty to encourage him not to abandon the truth, thinking no one cares.
The best way to encourage Sen. Hagel to stand firm in his true beliefs as Secretary of Defense is to defeat the very heavy Zionist lobbying effort against his confirmation. Call Congress at 1-877-762-8762 and ask to be connected to your House and Senate members. Tell them: "Please confirm President Obama's nomination of Chuck Hagel as Secretary of Defense." After he becomes Secretary of Defense it is important we encourage him to put the interests of America first, not Israel's.

Isn't it ironic that American Jews, the group least represented as members of the military, have set themselves up as the most important people to be pleased concerning our next Secretary of Defense! In 2003, an article in The Jewish Journal of Greater Los Angeles revealed "Only some 3,000 out of 1.4 million active duty service men and women are Jewish, about two-tenths of one percent. When it comes to Marines, the numbers are even more startling. It's one out of 1,000. One-tenths of one percent." Yet Congress, the President, and Sen. Hagel must carefully genuflect before this tiny special interest group whose chutzpah is exceeded only by their staggering power. The Zionists will allow Americans to fight and die to make the Mid-East safe for Israel, but they do not want us choosing our Secretary of Defense, a privilege they believe is Israel's.

It's time that a huge dose of reality and perspective, united with courage and fear of God (not the Jews) be injected in the national discussion. Please do your part in hastening America in this direction by helping confirm the nomination of a Secretary of Defense who at least knows the truth about Zionist power and has gone on record as protesting it.