One of the reasons Jewish control of big media is wrong is that it protects the sins of evil Jews, from Hollywood to New York to Tel Aviv, from being openly subjected to the cleansing effect of truthful analysis and criticism. This morally ghettoizes Jews, shielding them from the oxygen of constructive criticism, a force that functions to bless and mature everyone else. (See Jews Confirm Big Media Is Jewish)

This past week in New York City we saw yet more examples of the Jewish media’s misguided protectionism of Jews:

In a tight-knit community of people accustomed to handling problems among themselves, one young boy bucked the trend.

He accused a Yeshiva teacher and camp counselor of molesting him, and when a religious council of Orthodox Jews failed to take action against the man, the boy and his family went to the Ocean County Prosecutor’s Office for help.

And, a flier was circulated in Lakewood saying the boy’s father made a “mockery” of the Torah and committed a “terrible deed” by going to the secular authorities.

But the family stood its ground. Now, six years after the alleged abuse occurred, the man accused of molesting the boy is set to go on trial in a case that likely is to be closely watched by Lakewood’s Orthodox Jewish community.

Again, my supporter alerted the same NYC big media, speaking to the news departments. Although several international media reported on Kolko’s trial, I have been unable to locate any stories about it among the NYC big media print and TV outlets - except on the blogs of CBS and FOX which have few readers. NYC is the news center of the world. If they do not report it, it is unlikely it will be discovered or emphasized in media elsewhere. Needless to say, Christian media, such as pro-Zionist, evangelical Christian WorldNetDaily would never report such a story for fear it might be viewed as giving fodder to anti-Semites. Thus, evangelical Christian media and Jewish big media work in harmony to provide ironclad protection from public exposure to pedophiles within Orthodox Judaism.


The phenomenon of sexual molestation of Jewish children is one perpetrated primarily by authority figures in Orthodox Judaism. This includes Hasidic rabbis of the largest Jewish organization in the world, Chabad. Such indulgence comes from many encouragements of pedophilia in the Talmud, highest religious authority of modern Judaism.

Understandably then, we do not see rabbinic authorities rushing to launch investigations as to the cause of this scourge or encouraging the police and secular legal authorities to take action. The credibility of the Talmud, wellspring of modern Judaism, is on the line. Instead, there exists a persistent tendency among Jewish authorities to dawdle, send the offender to Israel or not respond to complaints of Jewish parents that their children are being molested.

This has recently become glaringly apparent in Melbourne, Australia, where sex offenders David Kramer and David Cyprys were allowed to continue to teach and associate with the youth of Chabad’s Yeshivah College (see Pedophilia 'Rampant' in Orthodox Judaism), even after complaints from parents that their children were being sexually molested. Yeshivah College is an independent, single-sex, Orthodox Jewish day school for boys. One parent testified in court that the director of Yeshivah College, Rabbi Yitzchak David Groner told him that, even though his 8-year old son had been sexually molested by Cyprys, he should not worry since children under 8 who had been sexually violated are not harmed. The father alleged that the rabbi told him he was informed by psychologists that sex at such an early age does not emotionally damage the child. If the father's testimony is true, it means that Groner is actually referencing the authority of the Talmud in Sanhedrin 69b. It says: “All agree that the [sexual] connection of a boy aged 9 years and a day is a real connection; whilst that of one less than 8 years is not.”

In the Soncino edition of the Talmud, the footnote to Sanh. 76a explains: “Marriage, of course, was then at a far earlier age than now.” Sanh. 69b says that if a woman allows herself to be penetrated by her minor son, she is fit to marry a priest. This is because a minor is not considered a “man” by the Talmud in the fullest sense. Thus, according to the Talmud, sex with a minor is of no moral or legal importance to the Jew (Sanh. 52b). A woman might, in fact, have sexual relations with a young boy without questions of morality even being brought up. “A small boy who has intercourse with a grown-up woman makes her [as though she were] injured by a piece of wood” (Kethoboth 11b). The footnote to this passage says: “Although the intercourse of a small boy is not regarded as a sexual act, nevertheless, the woman is injured by it as by a piece of wood.”

In my article, “Pedophilia: The Talmud's Dirty Secret,”as well my book, “Israel: Our Duty … Our Dilemma,” (available at Truthtellers.org) I fully document the Talmud's frequent and whole-hearted encouragement of sex with 3-year old girls. The Talmud says of baby girls that “Scripture speaks of them as 'fit for cohabitation'” (Yebamoth 60b). These many passages agree with Rabbi Groner that underage sex between a rabbi and a child is of no great moral, physical, medical or spiritual consequence. “When a grown-up man has intercourse with a little girl, it is nothing, for when the girl is less than this (three years and a day) it is as if one put the finger in the eye” (Keth. 116). The footnote to this passage says that as “tears come to the eye again and again so does virginity come back to the little girl under three years”. (See end of article for scans of these passages.)

Of course, any credible psychologist would insist that sex between an adult man and an 8-year-old boy or girl has a lasting and extremely traumatizing effect, both physically and emotionally. That is why it is legally characterized as abuse. If Rabbi Groner did in fact base a further three years of inaction in this case upon the Talmud’s authority, it powerfully confirms that, just beneath the surface of the pedophilia scourge among Orthodox authorities, there exists secret encouragement and tolerance of sex with minors. That is why those in Orthodox Judaism most familiar with the Talmud, the rabbis, Yeshiva teachers and other authority figures – not the common laity – are most guilty of pedophilia.


New York’s Yeshiva University is the most prestigious “Ivy League” center of Orthodox Jewish education in the world. Yet, because the epidemic of pedophilia in Orthodox Judaism is spreading so widely and rapidly, particularly threatening Talmudic-oriented leadership and institutions of learning, one of Yeshiva’s top deans, international Talmud expert, Hershel Schachter, in February recommended that Jews no longer report incidences of pedophilia to civil authorities. The Forward says Schachter “ … cautioned against reporting abuse to the authorities without first seeking advice from a Torah scholar, because, he said, police and social service workers often 'don’t handle the situation properly.'” Schachter also says that children can't be depended upon to tell the truth. He wants boards of rabbis/psychologists to now field all Jewish complaints of child molestation, only going to authorities as the last recourse. Schachter's recommendation is particularly ominous, since, as the Forward quotes one rabbi, “Hundreds of rabbis hang on [Schachter's] every word and interpret his every utterance as binding Jewish law … ” Contrary to hopes of reformers, the already close-knit Orthodox community, especially with Schachter’s encouragement, is not opening itself to investigation—especially investigation into the unmentionable Talmudic basis for Jewish pedophilia.

Again, if a Catholic archbishop or dean of a prestigious Catholic university, such as Notre Dame or Georgetown Univ., issued an edict that pedophilia by priests not be reported to police, they would be immediately fired—not to mention derided in world media for such blatant self-protection of the Catholic Church.

Schachter’s recommendation, however, although posted in the well-known Jewish Forward, drew no attention, much less criticism, from big media. There, Jewish pedophiles, unlike Catholic ones, are a virtually protected species. The public has not been educated to expect Orthodox, “Torah-believing” Jews to be capable of pedophilia. Instead, especially for tens of millions of Christian evangelicals, even Jewish pedophiles are above being “cursed” through criticism. They remain untouchable as “God's chosen people.” 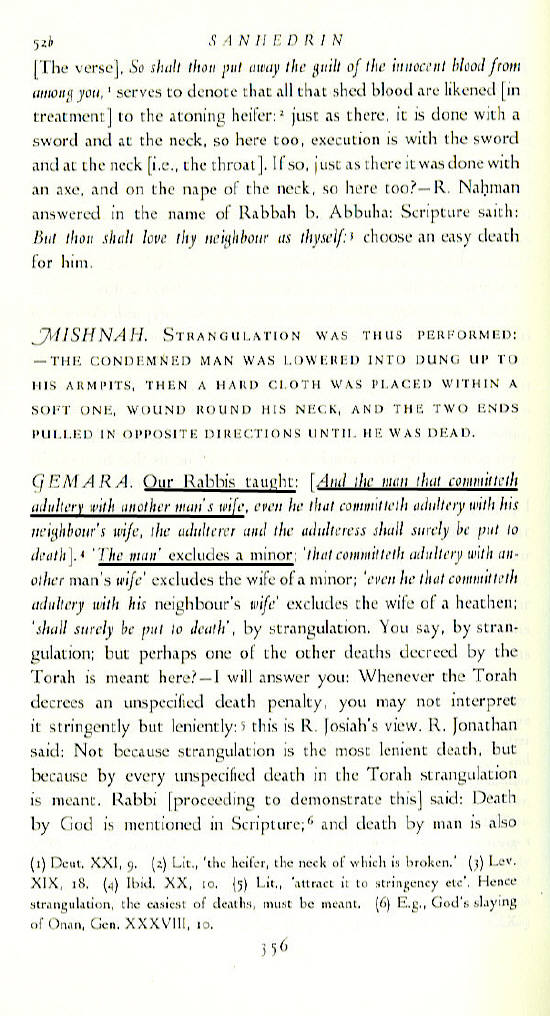 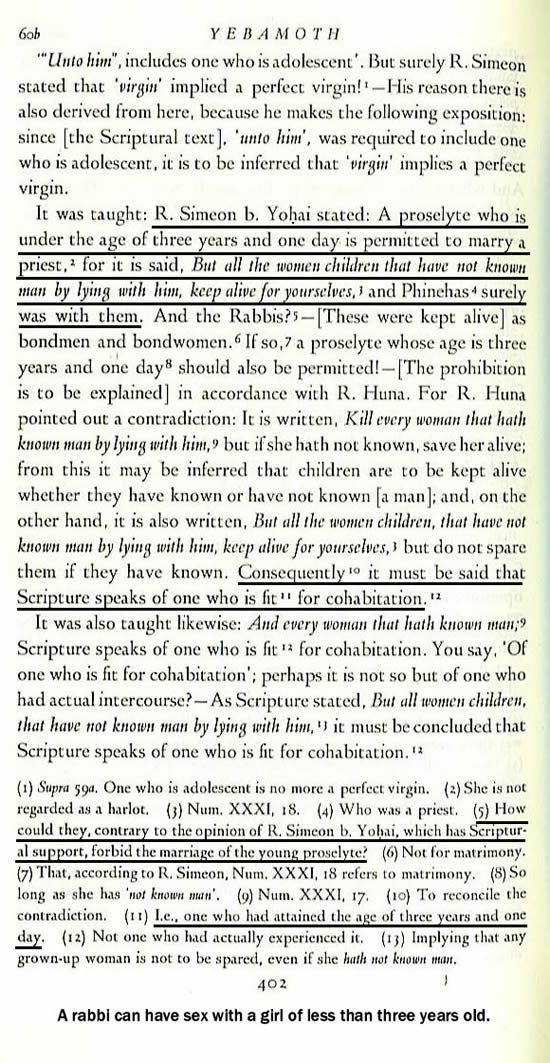 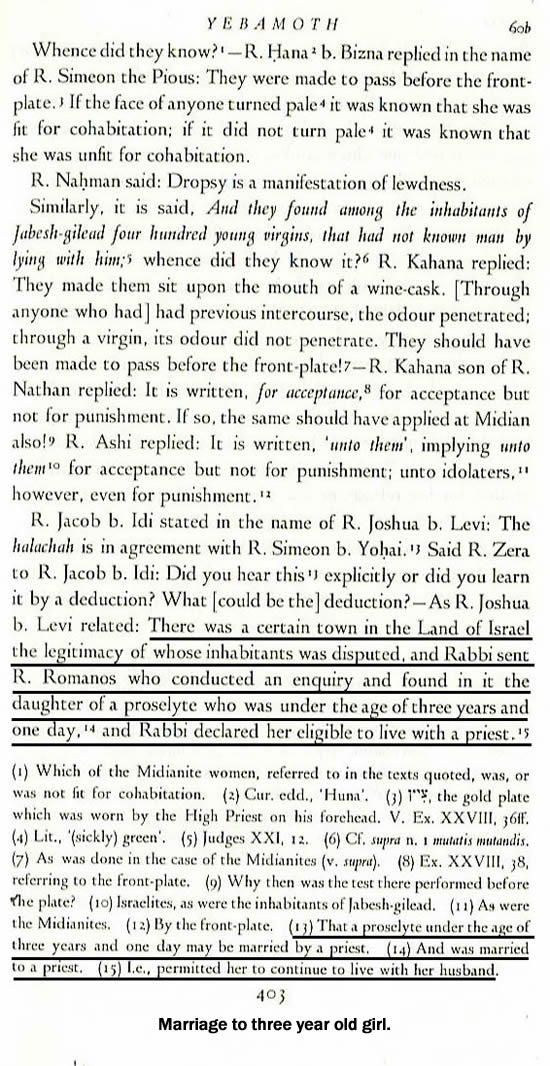 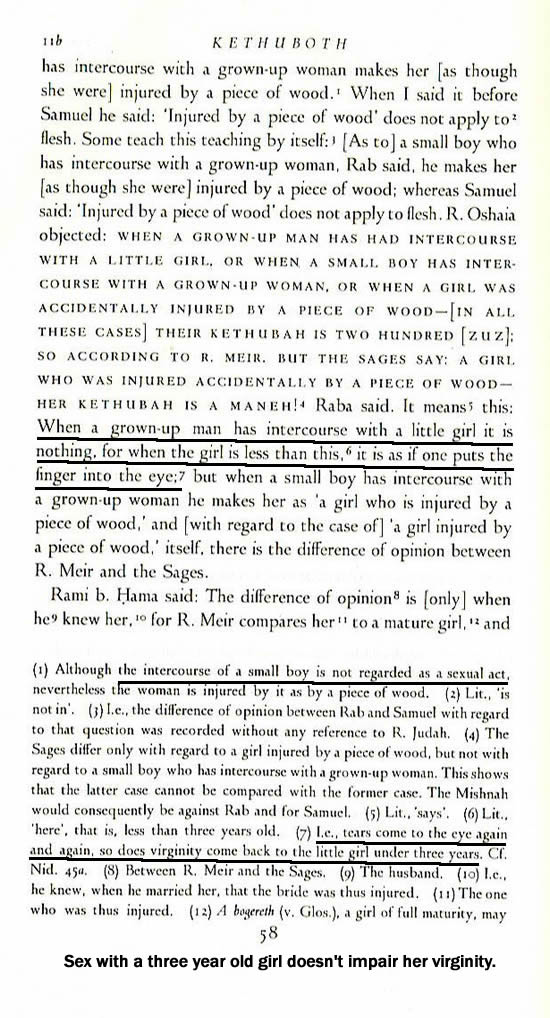