'DEPARTMENT OF PEACE' DOES VIOLENCE TO CHRISTIAN VALUES


The prophet Daniel foresaw a future one-world ruler, anti-Christ, and wrote, ‘…by peace he shall destroy many" (Dan. 8:25). Daniel’s strange vision makes sense when we look at ominous legislation for a new United States ‘Department of Peace.”

The Department of Peace and Nonviolence Act, H.R. 808, was recently introduced into the House of Representatives. It would establish a massive, $8-billion-a-year federal Dept. of Peace with the purpose of furthering what it describes, in Marxist jargon, as "peaceful coexistence.”

The ostensible promoter of this bill is the "Peace Alliance Foundation." However, the most important provisions of H.R. 808 are larded with unmistakable language and objectives of the world's most powerful Jewish activist organization, creator of hate laws world wide, the Anti-Defamation League. Such difference between the much milder objectives of the Peace Alliance Foundation (as evidenced in their writings) and stiffer ADL language in the bill suggests ADL, seeing a good thing, has come on board. They may have traded their legislative clout to pass the bill in exchange for the privilege of shaping H.R. 808. Cetainly H.R. 808 can be compared to a vast mansion, designed to be occupied by its architect - ADL. 1

ADL is not publicly promoting this bill. But that does not mean they are not behind it; rather, they want to slip it through, void of controversy which might result from their endorsement. This is ‘stealth legislation” at its most devious!

The ‘peace” ADL wants to accomplish through H.R. 808 won't be just, moral, or Biblical. Instead, it will honor the humanist values of moral relativism and ‘tolerance” -- in other words, appeasing and compromising with evil, while denigrating Christian values.

The objectives of H.R. 808 will be both international and domestic. In foreign affairs, the President, Congress, and military will have to seek the department's counsel in all decisions regarding the possibility of war or armed conflict. Ambassadors of the Dept. of Peace will intrude into and mediate conflicts all over the planet. A 4-year "peace academy" will send graduates throughout the world for 5-year stints as ambassadors of "tolerance," increasing respect for, among other values, the "alternative lifestyle" of homosexuality. The Dept. of Peace will attempt to establish reconciliation between racial groups. In the workplace, it will endeavor to ban criticism of or discrimination against homosexuals. Even in private homes, graduates of the peace academy will mediate in cases of domestic violence. If H.R. 808 is passed, ADL anti-Christian humanistic influence will pervade educational programs clear down to kindergarten!

The Dept. of Peace wants to create "peace" between Christianity and homosexuality. The battle of straight versus gay is a domestic ‘conflict” raging in heartland America, manifest in the current struggle over same-sex marriage. It believes this antagonism can be ended through tolerance and understanding, ie., an end to Christian "judgementalism."

The Dept. of Peace will emphasize education about hate crimes and prevention. Glance at ADL’s record at www.truthtellers.org, and you’ll know this means demonizing traditional morality as a source of ‘homophobic violence.” At www.adl.org, ADL exalts homosexuality as a natural, consequence-free lifestyle. H.R. 808 will "develop new programs that relate to the societal challenges of… racial or ethnic violence, violence against gays and lesbians…provide for public education programs and counseling strategies concerning hate crimes; promote racial, religious, and ethnic tolerance…" [Sec. 102 (A)(6)(10, 11)] It will promote such "peace education and objectives at all elementary and secondary schools in the United States…" [Sec. 112 F(2)]

H.R. 808 will also work to "promote full compliance with domestic and international labor rights law." [Sec. 110 (A)7] Current anti-discrimination legislation already stifles workplace evangelism for Christ and criticism of homosexuality. This bill will encourage such pro-homosexual, anti-Christian laws worldwide, making it a bias crime to criticize or discriminate against sodomites.

The Dept. of Peace, like the Dept. of Global Anti-Semitism established in the U.S. State Department several years ago (See, The Real Motive Behind the 'Department of Global Anti-Semitism'), is another attempt by ADL to gain power as the undisputed ethics teacher of our nation. Under its Hate Crimes Statistics Act of 1990, ADL, the civil liberties arm of the international Jewish religious organization B'nai B'rith, defines for the U.S. government, FBI, and every policeman in America such crucial terms as bias, hate, tolerance, and anti-Semitism. Enormous power lies in the privilege of defining these pivotal ethical terms -- the premises by which society lives, loves, and hates.

ADL now wants even more power to saturate every classroom and governing body with its distorted definition that "hate" equals bias against federally protected groups, especially homosexuals and Jews. This definition automatically makes the Bible into hate literature. Those who believe it (Christians) become "haters," potential hate criminals.


Say No! to Phony Department of Peace

For decades, ADL has organized local programs, particularly in schools and local governments, to promote acceptance of homosexuality. Their educational outreaches spew a constant barrage of propaganda from kindergarten through graduate school. If H.R. 808 passes, ADL indoctrination will exponentially increase, funded by $8.39 billion of taxpayers' money. 2 That's 8.39 thousand million of your hard-earned tax dollars dedicated to teaching our children that "love" is tolerance of sodomy and "hate" is Christian "homophobia," a psychiatric disorder!

In short, ADL, like its coming messiah, anti-Christ, is using false "peace" to "destroy many."

Here is what you can do today to destroy its influence and credibility:

Top Priority: Print my new flyer: "Department of Peace Does Violence to Christian Values." Send it to the House of Representatives member from your district plus their 8-10 legislative aides (available at www.truthtellers.org).

Call your member of the House of Representatives and protest passage of the Department of Peace bill, H.R. 808. Call toll free 1-877-851-6437. Say: "This is more phony anti-hate legislation designed to further the thought crimes agenda of the Anti-Defamation League. This is not the way to real peace."

It's time that ADL be discredited, not just in Congress but also at the local level. Now is the perfect opportunity, while ADL's federal hate bill is in Congress, to saturate key leaders and opinion makers in your community with my powerful flyer: "Anti-Hate Laws Will Make You a Law Breaker" (available at www.truthtellers.org). Go to the information desk of your local library or online to find the addresses of the following officials: your governor, attorney general, state senators and representatives, superintendent of public education, county commissioners, city council members, local police chief and the bias crime unit of your local police department. This flyer should also be sent to church and civic leaders and organizations including local TV and radio media, especially talk show hosts.

Christian America is nearly a century late in dimly perceiving (let alone restraining) propaganda and legislation fomented by ADL. America can’t survive much longer if ADL, immune from criticism because it is Jewish, continues to subvert our values and civilization.

The Department of Peace bill is huge legislation, preoccupying four committees in the House. The Democrats want it badly. Buttressed by 62 sponsors, H.R. 808 will pass the Democrat controlled House within the next few weeks unless it is loudly opposed. Few members of Congress want to go on record as voting against "peace” — unless you speak out NOW. We must link this legislation with ADL's hate laws agenda, which is being discredited in Congress, primarily through circulation of thousands of my hate crimes flyers. Let's keep up the offensive!

There is peace to men and nations who honor God's truth. But for those who try to manipulate reality to bring peace another way, the Bible is clear: "There is no peace to the wicked" (Isaiah 48:22). 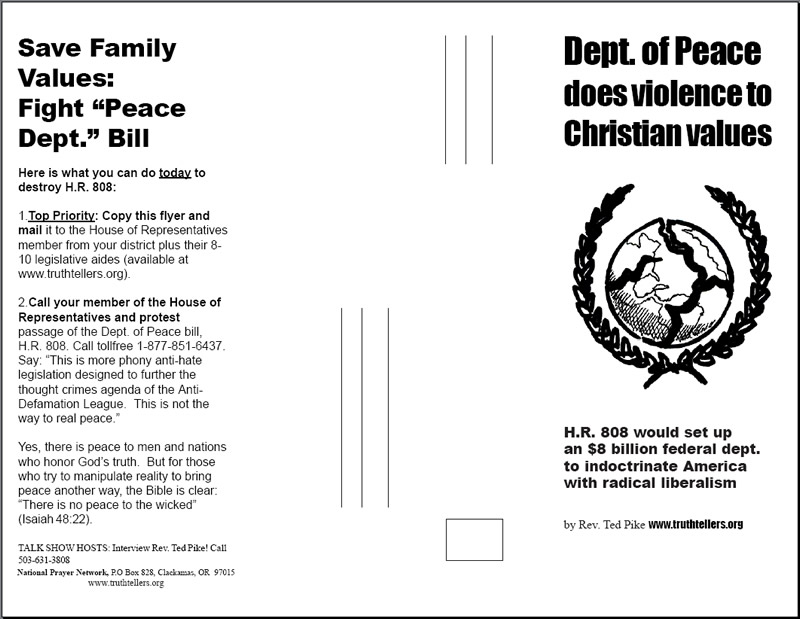 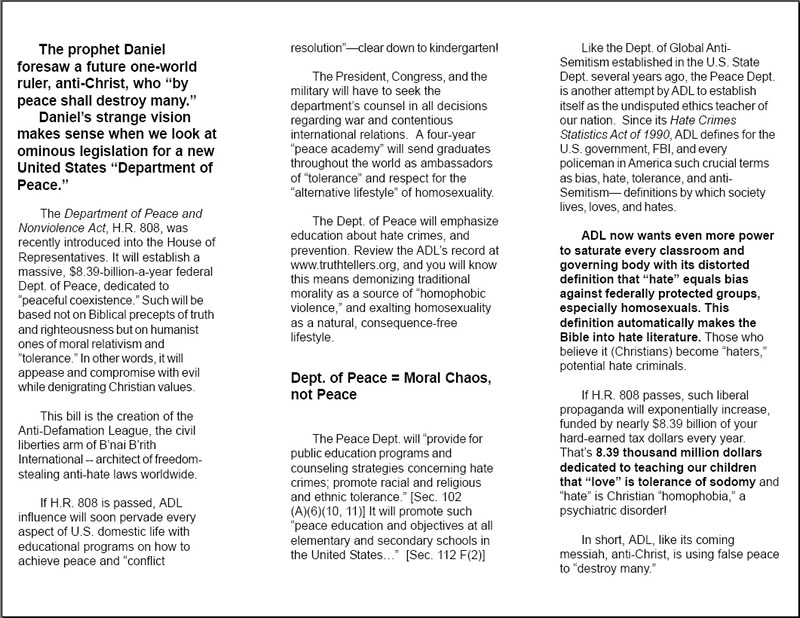