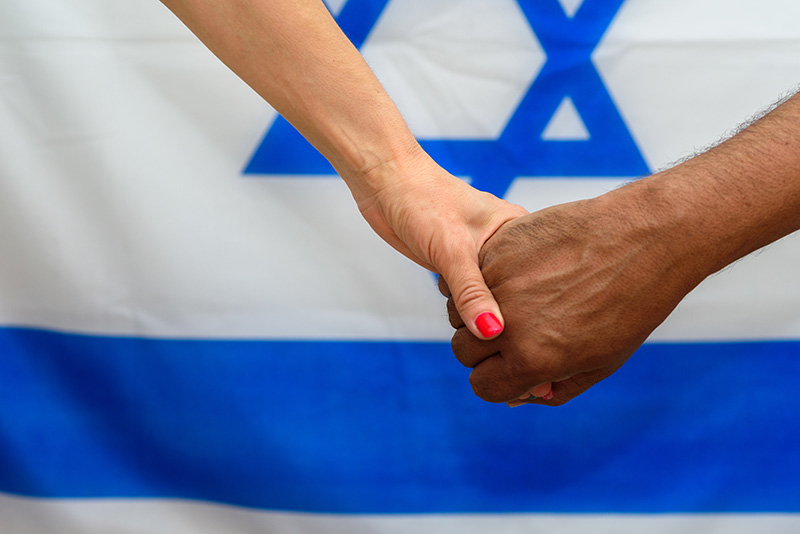 Ethiopian Falasha Jews possess among the lowest genetic evidence of Jewish ancestry. In any country but Israel they could be considered blacks. Yet several decades ago they were welcomed by idealistic Zionists to Israel, "the land of their forefathers," and included in the romance and drama of aliyah. Now Israel has apparently tired of this African "Jewish" population.

Recently, Jewish landlords of the township of Kiryat Malakhi signed an agreement not to rent to them. This brought howls of "Racist!" from civil liberties groups in Israel. But such discrimination can't hold a candle to what a recent documentary, aired on Israeli TV, revealed: The government is practicing systematic birth control of Falasha black women without their knowledge!

Haaretz reports that as soon as Ethiopian Jewish black women arrive in Israel, the government has them injected with a birth control shot without their knowledge or consent.


It's hard to believe, but in Israel, in 2012, Ethiopian women are forced to receive injections of the Depo-Provera contraceptive…it is also given to many new immigrants from Ethiopia…more than 40 women have received the shot…The injections given to Ethiopian women are part and parcel of the overall Israeli attitude toward this wave of immigrants. During the 1980s and 1990s, thousands of Ethiopian Jews spent months or years in transit camps in Ethiopia and Sudan. Hundreds died en route to Israel simply because a country that is supposed to be a safe haven for Jews decided the time wasn't right, they couldn't all be absorbed together or they weren't Jewish enough -- who had heard of black Jews?…They continue to receive "treatment" in absorption centers, where the children are sent to religious boarding schools and included in special education frameworks, while the parents stay in ghettos and the women continue to receive injections. We are told there is no choice. The repressive, racist and paternalistic policies continued unhindered -- policies that are supposedly in the best interests of the immigrants, who don't know what is best for them. This policy of total control over their lives, which starts while they are still in Ethiopia, is unique to immigrants from that country and does not allow them to adjust to Israel. Using the excuse that they need to be prepared for a modern country, they are brainwashed and made to remain dependent on the state absorption institutions." ("Israel's Ethiopians Suffer Different 'Planned Parenthood'" Yardai, Haaretz.com)

As a result of growing international outrage, Haaretz says in its article "Israel admits Ethiopian women were given birth control shots:"

"Health Minister director general instructs all gynecologists in Israel's four health maintenance organizations not to inject women with long-acting contraceptive Depo-Provera if they do not understand ramifications of treatment."

In a recent e-alert I described how Jews not only played a dominant role in selling black Africans to America for 300 years but how the Jewish-spearheaded Civil Rights Act created a welfare mentality in the US black population. The Act conveniently helped guarantee majority black loyalty to the Democrat party and laid the foundation for the present federal hate crimes law.

The Civil Rights Act was ostensibly passed to grant equality to blacks. It actually enshrined in federal law the idea that one group of historically victimized citizens should be privileged over other Americans with services and legal protections. In other words, it can be lawful for the government to discriminate against majority populations in favor of minorities. The Act laid the foundation for the Jewish Anti-Defamation League and federal government hate crimes laws, giving federal rights to racial, sexual, and religious minorities. The "compassion" of liberal Jews toward blacks actually veiled use of them as steppingstones for establishment of a hate crimes legal system that vastly favors the Jewish agenda over the interests of a white, Christian majority.


Little Love for Blacks in Israel

The government of Israel is similarly showing its lack of real humanity toward black Ethiopian "Jews." This suggests that the ostensible alliance between Jews and blacks in Israel has also been self-serving and manipulative, purposefully disempowering Falasha blacks. Such is treatment unthinkable toward any of Israel's predominantly Ashkenazi, Eastern European white citizens. Israel's covert sterilization of its female black citizens, now admitted by its Ministry of Health, makes it even more difficult for Israel to deny the frequent charge that it is an undemocratic, racist/apartheid state.