On April 9, 1948 an International Red Cross representative was among the first to arrive at the infamous Deir Yassin massacre. Zionist Irgun and Stern gang forces under orders from Irgun leader and future Prime Minister of Israel, Menachem Begin, had descended on a sleeping Arab town near Jerusalem, slaughtering over 100 of its inhabitants. Victims of all ages were hacked in pieces, many filling a well. When the Red Cross arrived, killing was still going on. Their representative described a very beautiful young Jewish Irgun fighter finishing the last murders. She came up to an elderly Arab woman and repeatedly stabbed her, killing her before his eyes.

That woman reminds me of Pamela Geller—a Jewish inheritor of the same homicidal zeal to purge the world of Arabs and Muslims. Geller sympathizes with Norwegian mass murderer Breivik who tried to stem Muslim immigration through slaughter. She resembles Begin, who claimed he was the “father of terrorism” in the world. Why? She has advocated the ultimate act of terror: annihilating all Muslims in Europe (along with Gentiles and plenty of her own people, the Jews) should Iran attack Israel. She believes this should be Israel’s “price tag” for how Europe has mistreated Jews and promoted Muslims. (See Pam Geller: If Iran Attacks, Israel Should Nuke Europe) Begin would have loved Geller.

Does Pam Geller sound like a civilized human being? Her instincts, like those of the beautiful Irgun terrorist at DeirYassin, are quintessentially savage.

Yet she has run ads in SF, NYC and DC and now in my hometown of Portland, OR saying: “In any war between the civilized man and the savage, support the civilized man. Support Israel. Defeat Jihad.”

Israel has revealed actions and attitudes toward her Arab citizens which are anything but civilized. On the day after the Deir Yassin bloodbath, Irgun trucks with loudspeakers went throughout Judea proclaiming that if Arabs in Palestine did not immediately flee their businesses, farms, and homes they would suffer the same fate as the Arabs of Deir Yassin. Eventually, half of all Arabs in Palestine fled, most with only the clothing on their backs, attempting to find safety in Jordan, Lebanon, Syria and Egypt. Eventually, they were incarcerated in UN-run concentration camps. To this day they are forbidden to return. Advocacy of such return and repossession is defined by Israel as “terrorism,” “denying Israel’s right to exist,” and “denial of Jewish rights of self-determination.” (See Debunking Joe Farah's Jewish Fables)

It is difficult to conceive of any government treating its indigenous inhabitants in a more uncivilized, savage manner. Yet that, with many subsequent massacres and expulsions of Arabs, is how Israel has created its much touted “democracy.” It was founded through savagery, not negotiation or legitimate purchase of Arab lands. Theft and brutality created the “miracle” that is modern Israel. (See Israel: Founded on Terror)

Geller is in a propaganda offensive against Islam that will be citing a number of inflammatory statements from the Q’uran advocating violence and intolerance. She says that behavior of the Biblical Hebrews does not compare in “savagery” to what is taught in Islam’s holy book.
However, the Old Testament has not been the primary ethical and scriptural guide of observant Jews and the State of Israel during the past century of interactions with the Palestinians. That advisory role belongs to the Babylonian Talmud and its mystical/revolutionary companion, the Zohar, or Kabbalah. These, the holiest of scriptures for modern Judaism, do abundantly contain concepts and recommendations concerning the inhumanity of Gentiles and the rights of Jews to oppress and even destroy them. Such far exceed the “savagery” Geller ascribes to the Q’uran. Here are a few quotations from the Talmud and Zohar, taken from a number of translations:

To conclude, what could be more savage than a tiny nation wielding an exorbitant 300+ nuclear weapons—a nuclear stockpile far beyond what any nation would require in a nuclear conflict? Israel has marshaled the sympathies of many in the West through its claim that Iran is building a nuclear weapon and that a preemptory attack upon Iran is necessary. But Israel never mentions her own oversized nuclear stockpile. How “uncivilized” to amass such horrific potential to destroy civilization. Under the trigger of one deranged Israeli premier, the earth could go back in a few moments to before the Stone Age.

Muslims in America have countered Geller’s ads with their own. Here's my proposal. I suggest they, or anti-Zionist groups, mount a publicity campaign on busses in every major city in America, just as Geller plans to. These should copy Geller’s ad in format but feature a blue background, the color of peace. The ad should say: “In any war between civilization and savagery, support civilization. Support freedom for Palestinians. Stop Israel’s injustices.” 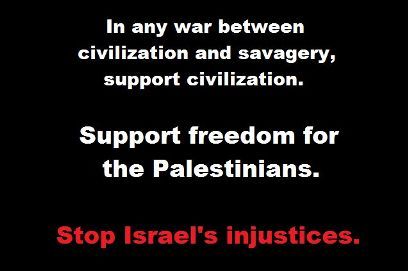 This graphic is not copyrighted. Please reproduce in any size and distribute widely.